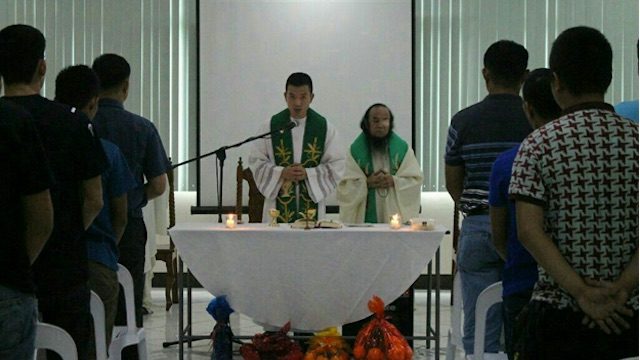 Facebook Twitter Copy URL
Copied
Father Teresito 'Chito' Soganub hopes to return to Marawi and celebrate Mass again at the Saint Mary's Parish, where he was taken by armed men when the war erupted on May 23

MARAWI CITY, Philippines – Reverend Father Teresito “Chito” Soganub had a bandage on his left eye after he was treated for cross eye, but it didn’t stop him from doing what he had always wanted to do since he was freed from captivity: say Mass.

On Sunday, September 24, the former hostage of the Maute local terror group in Marawi wore his priestly vestments to celebrate Mass inside the military headquarters in Camp Aguinaldo.

The military said he prayed for the soldiers fighting in Marawi and hoped that he could return to the city to say Mass again at the Saint Mary’s Cathedral, where he was taken the night the war erupted on May 23.

According to the military, saying Mass was among the priest’s first requests, along with getting a Bible and a rosary.

He was accompanied by Second Lieutenant Roegen Janaban of the Armed Forces of the Philippines (AFP) Chaplain Service.

“About 40 military personnel attended the Mass which Father Chito considered a celebration of life after he was saved by government forces from the battle-stricken city. It also served as a thanksgiving for the lives of all the civilians rescued from the hands of their captors in Marawi,” said Colonel Edgard Arevalo, chief of the AFP Public Affairs Office.

He was in captivity for 117 days until his rescue on September 16 from the Bato Mosque. He was flown to Manila and brought to Camp Aguinaldo for tactical interrogation, a routine interview with former hostages to extract information that could help the military in the war.

Intelligence reports previously suggested that Soganub had converted to Islam because he was reportedly praying with his captors using Muslim prayer rugs. (READ: Marawi priest Father Chito Soganub talks of ‘one God’ for Muslims, Christians) – Rappler.com