Aegis Juris not an accredited UST organization in 2017 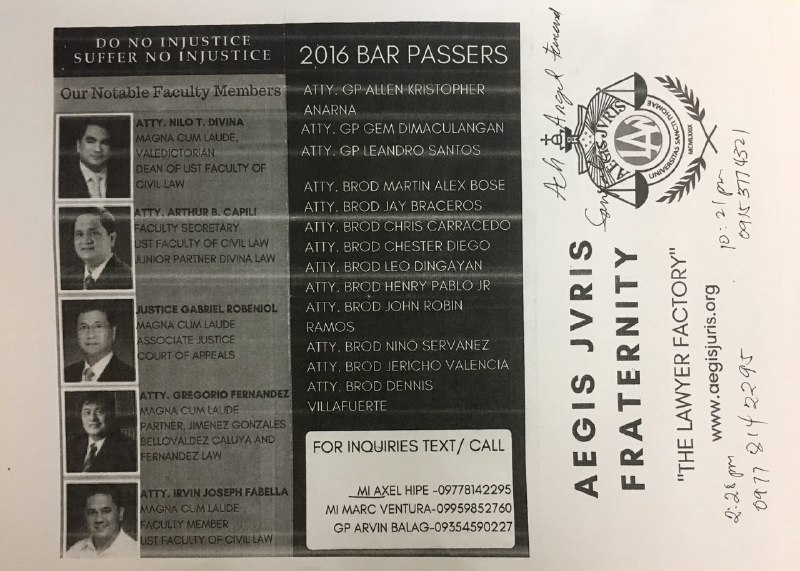 MANILA, Philippines – Aegis Juris, the fraternity accused of being behind the killing of hazing victim Horacio Castillo III, was not accredited by the University of Santo Tomas (UST) for 2017, admitted Faculty of Civil Law Dean Nilo Divina on Monday, September 25.

“For this year, Aegis Juris is not recognized,” Divina said in a Senate hearing on Castillo’s death, after Senator Joel Villanueva asked whether the fraternity was accredited.

Quizzed by Senator Juan Miguel Zubiri, Guan Hing added that they did not receive any letter from the fraternity, or any request for school representatives to attend welcoming rites.

With this, Villanueva pointed out that the fraternity had violated the Anti-Hazing Act just by failing to send the letter.

“Section 2 [of the Anti-Hazing Act] requires that prior to any rites or rituals, written notice must be filled or submitted to school authorities before the activity,” the senator said.

Under the law, the written notice or letter should contain the duration of the activity, the names of the students involved, and a plan to prevent violence. (READ: Facebook Messenger chat may give clues to Castillo’s hazing death)

Organizations, regardless of accreditation, are also required by law to approach school authorities and get at least two school representatives “to see to it that no physical harm of any kind shall be inflicted upon a recruit, neophyte or applicant.”

It was not made clear why Aegis Juris did not get accreditation for 2017. (READ: Aegis Juris co-founder vows ‘no cover-up’ in Castillo’s fatal hazing)

The last blunder before Castillo’s death was the fraternity’s involvement in a fight during the 2016 Bar Examinations, which ended with all members of Aegis Juris suspended from all Bar and student activities. – Rappler.com