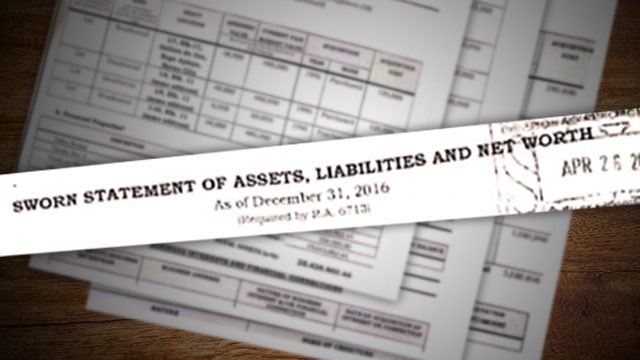 Facebook Twitter Copy URL
Copied
A public official's home address and details about his or her children who are minors will remain blacked out, says PCOO Assistant Secretary Kris Ablan

MANILA, Philippines – A Malacañang official said on Tuesday, September 26, that details on the wealth of public officials in their Statement of Assets, Liabilities, and Net Worth (SALN) will not be redacted or blacked out in future releases.

In a press briefing, Presidential Communications Operations Office (PCOO) Assistant Secretary Kris Ablan said information related to the assets and liabilities of a public official will be disclosed in new copies of SALNs to be released to journalists and requesting parties.

With guidance from the National Privacy Commission (NPC) and after meeting with SALN repository agencies, Ablan said details like acquisition costs of properties and the total amounts on the SALN will not be shaded with a black marker.

The Philippine Center for Investigative Journalism (PCIJ) reported last Friday, September 22, that such details in December 2016 SALNs of Duterte Cabinet officials had been redacted in copies released to media. (READ: Redactions in Duterte Cabinet’s latest SALNs ‘deal-breaker’ for FOI – PCIJ)

Journalists use these details to check the lifestyle and wealth of a government official or employee while in public office. (READ: Trillanes wants Senate probe into hidden SALN data)

But Ablan maintained, “Next time the journalist or the public would request for the SALN of officials, we will follow the practice of redacting the home address and the names of unmarried minor children.”

“[It] may also include the revision of the SALN form itself, on whether or not to include the names of the minor children, if there are no business interests at all,” he added. (READ: Malacañang defends Cabinet ‘right to privacy’ in SALN)

The CSC is also considering the placement of a warning in future SALN forms saying officials “do not need to put the bank account number and the plate number of their motor vehicles because there’s no need for those information [on the SALN],” Ablan said.

SALN repository agencies had expressed concerns over what to do with such information if volunteered by the public official, continued Ablan.

Excluded from the scope of the Data Privacy Act, noted Patdu, are information about any current or previous government official or employee that relates to his or her position or functions.

Patdu also said information required by RA 6713 or the law governing SALNs – like details on real and personal properties, other assets, liabilities, and business interests – are not sensitive personal information, even when checked against the Data Privacy Act.

“There is no need to redact these information because they are already covered by the law,” she said.

However, Patdu pointed out that there are still limitations in obtaining and using information on the SALN.

For instance, she said, the implementing rules of RA 6713 include limitations on disclosing information on the SALN “that would put the life and safety of an individual in imminent danger” or those that would lead to “unwarranted invasion of personal privacy.”

Patdu then reminded the government and the public to be “more circumspect when what is involved is personal information.”

“There are other information in the SALN form that maybe we could evaluate whether it is still necessary and proportional to the legitimate aim of having transparency and good governance” such as the exact home address, names of children who are minors, and ID numbers.

Nonetheless, Patdu said the right to privacy and the free flow of information should not clash.

“It’s about putting value to these rights and finding a way to harmonize and how they can both be exercised,” she said. “They are all rights that are critical to a democratic society.” (READ: Citizen advocates raise issues in FOI rollout) – Rappler.com