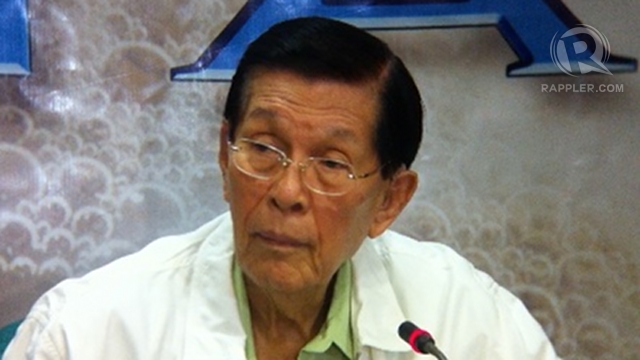 Enrile was offended by Ong’s October 16, 2012 column “Like father, like son,” which he said had “malicious objective.”

“The article characterizes JPE [Enrile] as liar, fraud, and manipulator. It accuses JPE of attempting to “revise history” with a devious purpose of enticing the electorate to support his only son, Juan Castañer Ponce Enrile, Jr (popularly known as Jack Enrile), an incumbent congressman in the province of Cagayan and a candidate in the upcoming senatorial elections,” according to Enrile’s complaint.

Ong’s column exposed inconsistencies in claims Enrile made in his book Juan Ponce Enrile: A memoir. Ong cited various accounts of how Enrile admitted after the 1986 “People Power” revolution that the assassination attempt against him – which was one of the reasons used to justify martial law – was staged. He recants this in his book.

The column moves on to discuss the senatorial bid of his son and namesake Cagayan Rep Juan “Jack” Ponce Enrile Jr. She cited the “intrigues” involving Jack – the “urban legend” that he killed the late actor Alfie Anido and the Enriles’ supposed involvement in smuggling in Cagayan.

“Defendant Yoly, instead of giving fair comments on JPE as a public official, deliberately focuses on attacking his character with false and defamatory accusations and intrigues affecting his family and personal life,” the complaint added.

Enrile asked the court for P30 million in moral damages, P1 million in exemplary damages, and P500,000 in attorney’s fees.

The civil case was filed before Branch 118 of the Pasay City Regional Trial Court.

Ong is the managing director of one of the country’s leading advertising agencies Campaigns and Grey. The agency produces political advertisements for high-profile politicians, among others.

Ong has her own political advocacies. In 2010, she volunteered her services to the campaign team of President Benigno Aquino III.

In 2001, she was recognized for producing negative advertisements against re-electionist senators who were perceived to be protecting President Joseph Estrada during his impeachment trial then. They voted against the opening of an envelope that supposedly contained crucial evidence against Estrada.

Enrile was among those senators. Ong used old footage of Enrile’s involvement in the martial law regime and allegations  that he plotted coups against the late President Corazon Aquino. At the end of the ad, this slogan was added: “Ibabalik pa ba natin siya?”

Enrile lost in that elections. But he would return to the Senate in 2004.

Ong: ‘I spoke the truth’ Ong stood by her column.

“Initially I was unnerved because this is the first time I was ever sued for anything. But after reflecting and processing, I know I spoke the truth and that made me a bit braver,” she told Rappler.

Besides, she wasn’t the only one writing about Enrile’s inconsistencies, she added.

“All the lawyers I’ve consulted said there was no libel. Many wrote about Enrile’s latest verion of the real or fake assassination attempt. But as far as I know I’m the only one he sued. As a friend said, I have ‘arrived,'” Ong added.

The court issued the summon to Ong on December 13. She has 15 days to respond. – Rappler.com