Oct 6, 2017 6:12 PM PHT
Carmela Fonbuena
Facebook Twitter Copy URL
Copied
Major General Danilo Pamonag has been in Marawi since the start of the war, tapped to bring in his experience in the first big war in urban terrain that the military faced 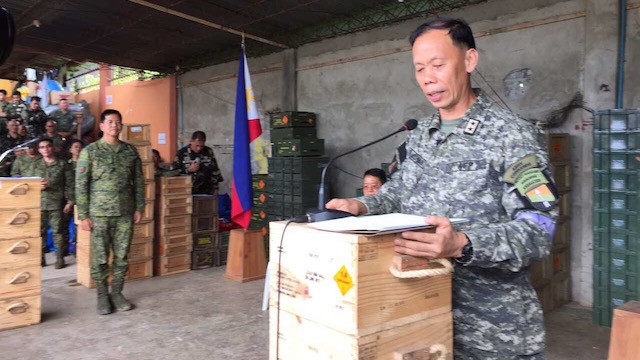 MANILA, Philippines – The officer who led military operations in the 2013 Zamboanga Siege is the new ground commander in Marawi City.

“I will continue to help the people of Marawi to bring normalcy in the city by ending the conflict the soonest possible time,” Pamonag told Rappler when asked for his message to Marawi residents.

Pamonag had been in Marawi City since the start of the war, working alongside Bautista. He was tapped to supervise military operations inside the battle area because of his experience from the 2013 Zamboanga Siege, the first big war in urban terrain the Philippine military faced. (READ: Marawi battle zone: Urban warfare challenges PH military)

As JTF Marawi chief, he will also lead operations in cleared areas or the so-called safe zone. The military is making sure that the return of civilians in these areas will not pose new threats.

In 2013, Pamonag was chief of the Joint Special Operations Group (JSOG), the unit that consolidated efforts of the elite units of the army, navy and air force  (READ: Zamboanga Siege: Tales from the combat zone)

He is now the chief of the Philippine Army Special Operations Command (Command), the Army unit that leads its elite units – the Scout Rangers, Special Forces, and the Light Reaction forces.

The siege in about 5 coastal villages in Zamboanga took about 3 weeks. The military said the terrain there was not as difficult as in Marawi, where the enemies occupied the commercial district.

The war in Marawi is now on its 5th month.