Military wants to wipe out CPP-NPA by 2018 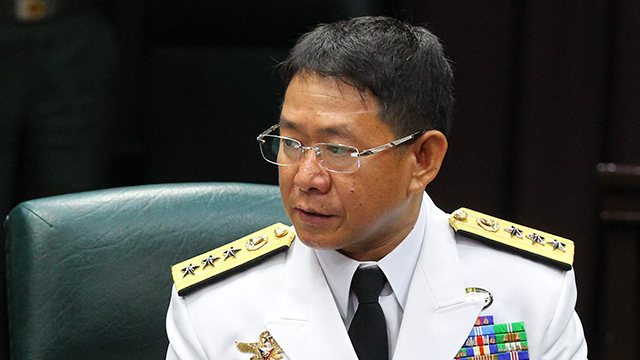 “Gusto nating mangyari, sa katapusan ng 2018, wala nang CPP-NPA kahit isa, sa buong Pilipinas,” Armed Forces of the Philippines (AFP) chief Eduardo Año said in his speech at the Eastern Mindanao Command on Tuesday evening, October 17. (What we want to happen, at the end of 2018, is for there to be no more CPP-NPA in the whole of the Philippines)

Año said the entry of some 13,000 new recruits into the AFP will bolster the government’s anti-insurgency drive. This, while it also recruited some 300 Lumad from different provinces in Davao region.

The military chief, also known as the “rebel hunter” for his achievement in arresting communist leaders including CPP chairman Benito Tiamzon, said wiping out their next target would allow the government to “start the positive economic development especially in Mindanao.”

The goal, according to Año, comes from the orders of President Duterte. Duterte had earlier called the NPA “terrorists” after he announced that he would be scrapping peace talks with them.

In February, Año said the AFP will hit hard against NPA to prevent them from conducting atrocities and criminal activites.

This month, around 70 NPA fighters attacked the facilities of the Davao Agricultural Ventures in Bukidnon.

The NPA said it did so to remind the company “not to aggressively expand in agricultural areas where staple food crops such as rice and corn are cultivated.”

Incidents like this have prompted exporters, including the Pilipino Banana Growers & Exporters Association (PBGEA) to call on government to protect them from further attacks.

They say these attacks stunt the growth of the banana export industry which is already saddled by calamities, export regulations, and competition from other exporting countries. – Rappler.com