Rubio confirmed the meeting in his Twitter account on Wednesday, October 18, and said they discussed ties between the US and the Philippines, as well as ensuring human rights in the administration’s war on drugs. 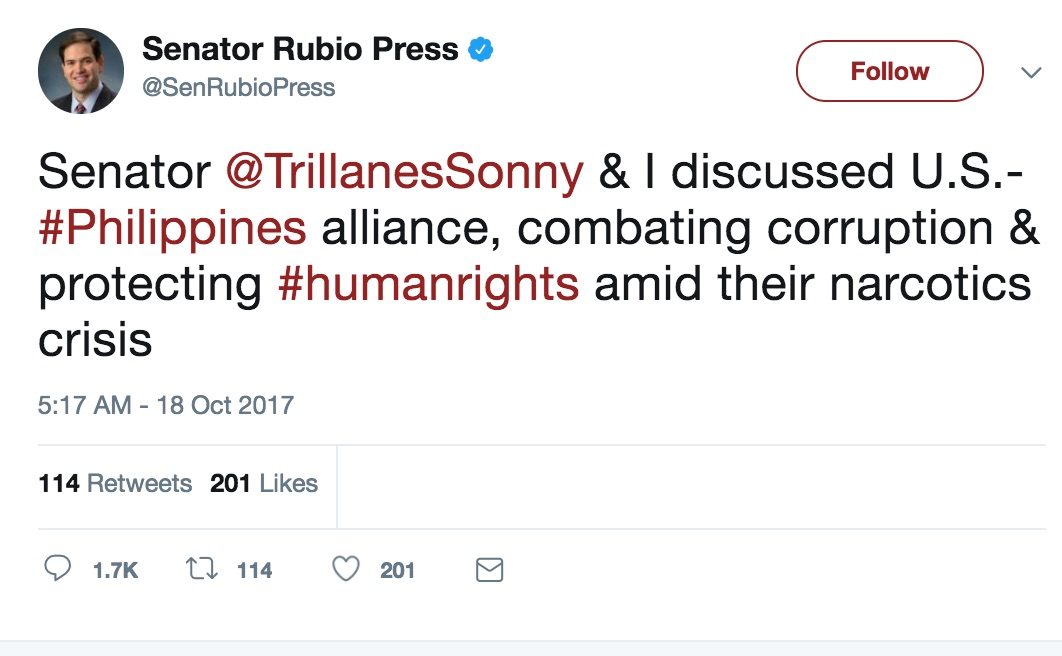 Trillanes left for the US on October 15, according to his staff.

Malacañang, for its part, said it knew about Trillanes’ US trip but is not privy about the purpose or details of the trip.

Responding to questions, Presidential Spokesman Ernesto Abella said Malacañang did not know whether the purpose of Trillanes’ visit was to convince US senators to persuade US President Donald Trump to scrap his scheduled Manila visit in November.

Abella hoped that Trillanes did not give Rubio biased information during their meeting.

“We do hope the correct information has been given and not biased information designed to adversely affect US-Philippines relations,” Abella said.

Trillanes has yet to comment on the issue. Senate President Aquilino Pimentel III told reporters that Trillanes indeed informed him of the US trip but “he has no details of his [Trillanes’] activities.”

Asked to comment on reports that Trillanes was asking US lawmakers to convince Trump to cancel his Philippine trip, Pimentel said, “Is he now a US politician?”

On the possible motive of Trillanes’ US trip, the Senate leader said, “Please direct questions to Senator Trillanes since I am abroad trying my best to develop enhance and strengthen PH relations with various countries (Russia and Great Britain).”

“I hope no one else is wishing or, worse, working for “bad” relations between the Philippines and other countries like the US and EU members. If we love our country we should always promote our beloved country’s best interest. Always,” added Pimentel, the President’s party mate and staunch ally.

Trump is set to visit the Philippines in November to attend the Association of Southeast Asian Nations (ASEAN) Summit and Related Meetings, the White House earlier confirmed.

Rubio and US Senator Benjamin Cardin of Maryland earlier introduced a bill seeking to restrict the supply of defense equipment to the Philippine National Police, which used to head the bloody campaign until Duterte ordered the Philippine Drug Enforcement Authority to take over following public backlash. – with a report from Pia Ranada/Rappler.com