Facebook Twitter Copy URL
Copied
A new Pulse Asia survey says majority of respondents from Metro Manila cite illegal drugs as their most urgent local concern, but this is not the case for the rest of Luzon

MANILA, Philippines – A new Pulse Asia survey released Friday, October 20, showed that road infrastructure, flooding, and illegal drugs are among the top concerns of Filipinos at the local level.

Pulse Asia’s September 2017 Ulat ng Bayan said that for 15.9% of Filipinos, the Duterte administration should immediately act on the country’s poor state of roads or road infrastructure.

The other top local concerns, according to the survey’s respondents, are flooding (11.2%) and illegal drugs (10.2%). A majority or 17.2% of Filipinos did not mention any local concern which they think should be immediately addressed by the administration.

Majority of respondents from Visayas (28.5%) and Mindanao (23.5%) cited road infrastructure as their leading local issue.

The table below shows other local concerns included in the survey: 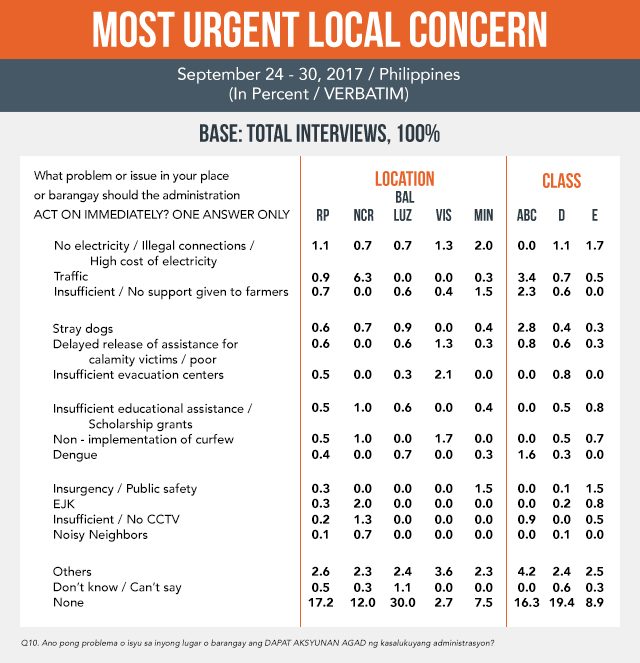 The survey conducted nationwide from September 24 to 30, 2017 used face-to-face interviews with 1,200 representative adults 18 years old and above.

Sampling error is ± 3% error margin for nationwide, and ± 6% for Metro Manila, the rest of Luzon, Visayas, and Mindanao. – Rappler.com