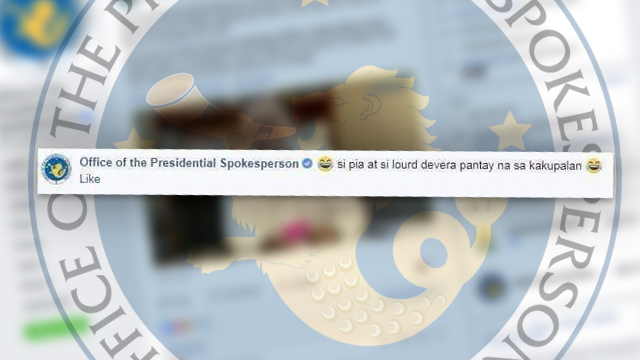 MANILA, Philippines – The Office of the Presidential Spokesperson (OPS) may have spoken too soon.

As if Presidential Spokesman Ernesto Abella’s office did not already have enough issues to deal with, his office’s verified Facebook account was caught commenting in troll-like language on a live video of a Malacañang press briefing.

The comment was posted during the question-and-answer portion of the Mindanao Hour press briefing on Friday, October 27.

The “Office of the Presidential Spokesperson” Facebook account, a verified one, commented at around 11:30 am, “si pia at si lourd devera pantay na sa kakupalan.”

(Pia and Lourd Devera are now even in terms of being jerks.)

Reporters at the time were asking questions about Marawi rehabilitation. The comment popped out soon after Rappler reporter Pia Ranada – the only reporter named Pia who spoke at the event – asked a question about foreign assistance.

“Lourd Devera” refers to Lourd de Veyra, a musician, writer, and TV news anchor. He is best known for his satirical take on current events.

It is notable that the tone used in the comment is similar to the one used by trolls, as it uses coarse language with an apparent intent to spread malice. The comment has since disappeared from the feed’s comments section.

As of 2:06 PM, the phrase “Mindanao Hour” began trending on Twitter. 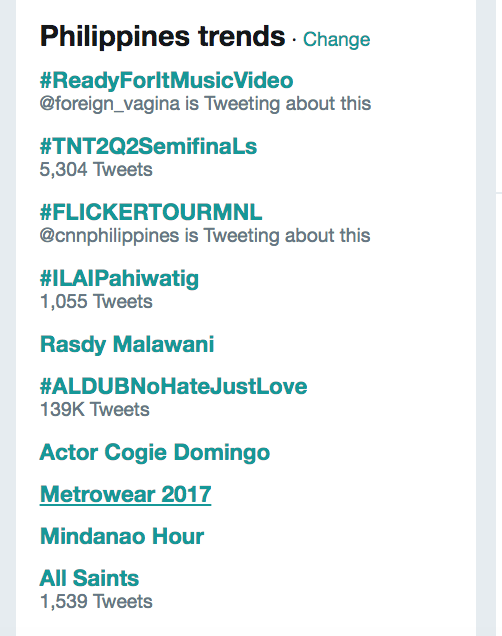 The OPS has responded to the gaffe with the following statement:

“The aforementioned comment was written by a former Administrator of the page who is no longer connected with the Office.

The said comment does not reflect the official and personal views of the Presidential Spokesperson or his office on the individuals being referred to.

The OPS Team has immediately acted on the situation by removing the former Administrator’s access to the page and restricting page roles.”

This is not the first online gaffe government officials or offices have made. Just last October 23, Mocha Uson, an assistant secretary at the Presidential Communications Operations Office (PCOO), used a misleading photo in a recent social media post about Marawi, using a months-old photo to describe the current state of the newly liberated town. She has also used misleading photos and information in the past.

The government-run Philippine News Agency had also committed several glaring errors on their website, such as using the logo for canned pineapple producer Dole for a story on DOLE, the Department of Labor and Employment. – Rappler.com