Duterte holding on to China’s promise on Scarborough Shoal BACK FROM JAPAN. President Rodrigo Duterte arrives from a successful trip to Japan and speaks at the Francisco Bangoy International Airport in Davao City on October 31, 2017. Presidential photo

Facebook Twitter Copy URL
Copied
The President says, 'I cannot imagine myself getting involved in a violent and almost suicide action' 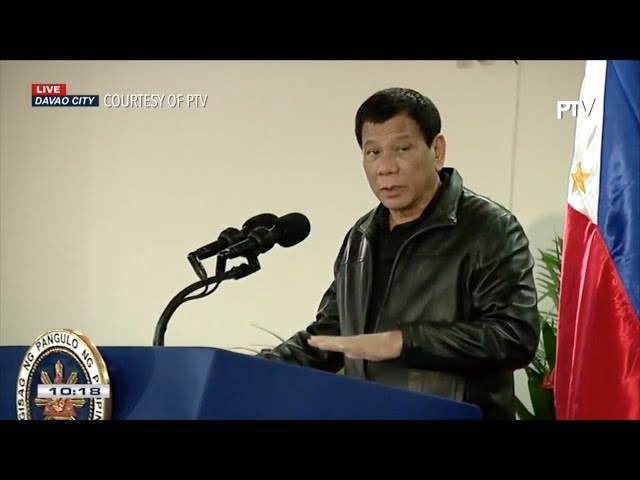 DAVAO CITY, Philippines – President Rodrigo Duterte said Tuesday, October 31, he is holding on to China’s promise that it will not build anything on Scarborough Shoal.

“Yes. Well, tayo (we), once I commit to you as President of a sovereign state, what comes out of my mouth is what it is. And it’s always a commitment with honor,” Duterte told reporters when asked about the issue.

During the press conference, the President said China’s promise brings peace, and he would rather talk with the foreign country instead of going to war.

“In the meantime that we are not really prepared, just about anything except to talk. And then let us just talk,” he said.

He added: “I cannot imagine myself getting involved in a violent and almost suicide action.”

The President has long said the country cannot stop China from building on Scarborough, adding that he cannot let soldiers die in a war where the country will only lose.

Defending Scarborough Shoal against the Chinese was Duterte’s presidential campaign “promise” and he even said he would ride a jet ski to the dipusted territory to defend the country’s sovereign rights.

The President, however, explained the statement was merely hyperbole.

On Tuesday, he said, “You can read all the legal treaties there claiming this and claiming that. But the problem, I said, is I do not want to criticize the big powers because it was really of their own making.” – Rappler.com