Nov 8, 2017 7:00 PM PHT
Eloisa Lopez
Facebook Twitter Copy URL
Copied
'It’s like they killed an animal,' says Liezel Du of the fate of her teenage daughter who had bullets lodged in her arms, stomach, and buttocks

MANILA, Philippines – Charlie Jean Du was 14 when she met Airon Cruz. Airon was a friend of a friend, a fisherman, and a man with odd jobs. Tall, tattooed, and handsome, he easily won the teenager’s heart, never mind that she was half his age.

Charlie had just enrolled in 7th grade when she learned she was pregnant. Airon had to force her to take the pregnancy test after noticing that she was becoming lethargic and short-tempered. Airon sent the photo of two positive pregnancy tests to Charlie’s mom on Facebook.

“You’re a grandmother now,” he told Liezel Du. “Don’t think about aborting this baby so we can avoid trouble.”

Charlie turned 15 while Airon turned 28 on the same day, September 30 – the truest sign, for them, that they were soulmates. They celebrated their 10th month anniversary on October 18. Charlie organized a surprise in Airon’s room, complete with heart cutouts and love letters. Friends called the couple “Mami Cha and Daddy A.” 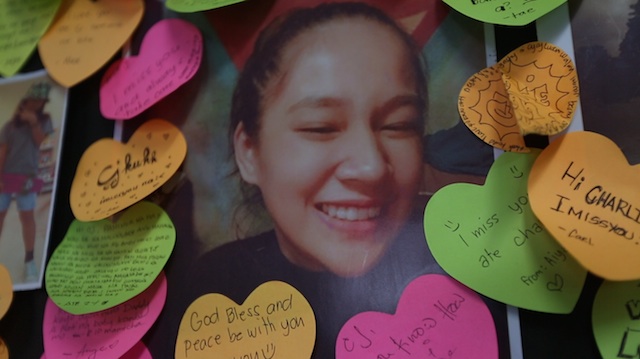 Charlie was 15 and 4 months pregnant when, in the dead of the night on October 23, Cavite City cops stormed Airon’s home. During what they claimed to be an “armed encounter,” police killed Charlie and her unborn baby, Airon, and 3 others on the spot.

“She was holding grenades,” the police said of Charlie.

It all started with a call from an unknown “concerned citizen” who supposedly informed police about gunshots heard from Airon’s home in Lopez Jaena St, Barangay 30 in Cavite.

Senior Police Officer 2 Marco Mallari, the desk officer at the Cavite City Police station, supposedly received the call at about 3:45 am on October 23. In response to the complaint, the cops conducted “Oplan Galugad” in the area and proceeded to Airon’s home.

When the cops arrived in the alley about 5 meters away from their destination, police claimed that the suspects, using “individual firearms”, started firing toward their direction. Forced to give chase, the cops had to retaliate against the “gang group” leading to the killing of alleged gang leader Airon; live-in partner Charlie; Airon’s brother Arcy; and friends Jeffrey Dasig and Romeo Bejemano, 32 and 25, respectively.

At least 3 other suspects supposedly escaped the encounter.

The police blotter said the group, reportedly hired by local politicians, was behind the numerous riding-in-tandem killings in the province. Airon, the blotter read, was also  supposedly involved in illegal drug distribution.

The blotter was signed by the case investigator, Police Officer 2 Julius LLave. For Nancy Cruz, however, nothing in the official report came close to the true tale of that fateful night, she swore before the coffins of her two sons. 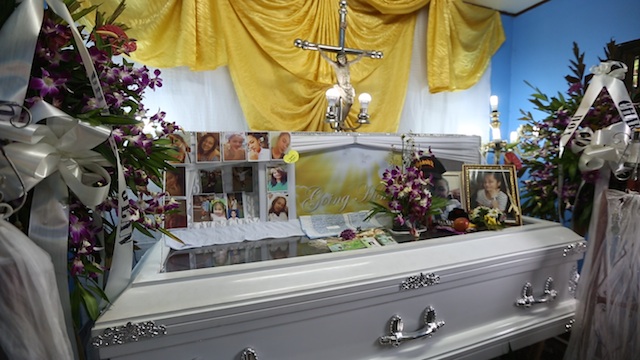 Nancy said there were no shots fired before the police arrived, nor were there any signs of “retaliation” in Airon’s house. Nancy lived about 10 houses away from the crime scene.

“I would have heard if it were true,” she said.

Nancy woke up that night from the loud knocks of a neighbor, who told her that Airon’s house had been raided, and that he had been shot. Half asleep in the middle of the night, Nancy ran to her son’s house and as she came closer, she heard two gunshots fired.

Inside Airon’s house, at least 8 men in plain clothes with big guns stood in a circle. They wore T-shirts, shorts, and slippers, but Nancy knew they were cops because a police car was parked outside the house.

Nancy asked to be let in, but with armalites around, she was forced to stay out.

There was silence for at least 5 minutes until two gunshots were heard again. At this point, Nancy still had not thought that her sons had been killed. She figured the police might have been firing shots to scare Airon to surrender.

A cop then stepped out of the house, with an armalite strung across his body, and a big smile on his face. He reeked of liquor and sweat, Nancy recalled.

“Sir, perhaps you could let me in now? I want to see my sons,” the mother asked.

“Maybe later, when the SOCO arrives,” the policeman said.

It was only then that Nancy figured that the cops had killed everyone inside the house.

Charlie’s mother, Liezel, woke up to news that her daughter’s boyfriend had been shot and killed by police. 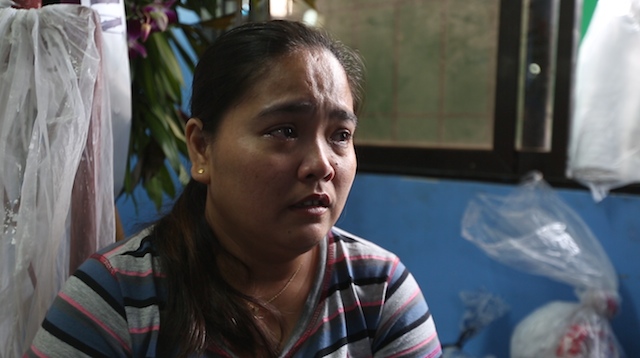 She rushed to Airon’s house, expecting to see her daughter devastated by the loss. It never crossed her mind that her only child would also be killed.

The house was already cordoned off by a police line when Liezel arrived. Cops who surrounded the area were chatting and laughing “like nothing happened,” Liezel observed.

“The fair-skinned, teenage girl, where is she?” Liezel asked a cop. “That’s my daughter. She’s actually pregnant,” she added.

Liezel did not get an answer until Airon’s sister told her that Charlie was not spared.

Neighbors told Liezel that they heard Charlie begging for her life before she was killed. “Please, spare me. I’m pregnant!” Charlie was heard screaming.

It took about 4 hours until Scene of the Crime Operatives (SOCO) arrived in Airon’s home. “Even if she had the chance to survive, she would have died waiting for help,” Liezel said.

Liezel was reunited with Charlie in the morgue. The teen’s eyes were still open, her body bloodied by gunshots. She had bullets lodged in her arms, stomach, and buttocks. The death certificate listed homicide as her cause of death.

“It’s like they killed an animal,” Liezel said. “And to think that this was a human, a girl, a minor, and pregnant.”

Charlie, or CJ as she was fondly called, was just a giddy teenager in love, according to those who know her. Getting picked up at home by a man in a motorcycle seemed like a daydream for the then 14-year-old. Airon was a man who knew what he wanted, and made ways to get them.

“He really liked young girls,” Liezel said. “I don’t know why – maybe they were easier for him to fool.”

Charlie got pregnant in less than a year into the relationship. It almost did not come as a surprise to Liezel when she found out. Charlie had stopped going to school only a month after the schoolyear started, complaining that she was feeling sick almost every day. Scared to hear the truth, Liezel never asked her daughter if she was pregnant. 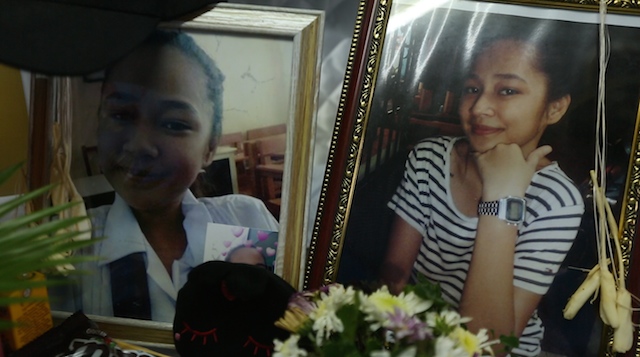 After a month, the symptoms of pregnancy became all too obvious for either of them to deny. Airon sent Liezel a photo of the positive pregnancy tests, confirming what she already knew. Charlie begged her mom to be allowed to move in with Airon.

Liezel admitted that she did not know much about the guy. She didn’t know what his real job was, or how he made money at all. “I just trusted CJ when she told me he was not into drugs,” Liezel said.

Yet at least thrice a week, Airon would be out at night for a “gimmick” or to “go off with his other girlfriend,” as Charlie would say. The teenager took this time to bond with her mother, strolling around the town’s bazaar and buy new clothes to fit her growing belly.

Liezel often warned Charlie of what she was getting into. “I knew he [Airon] had enemies,” Liezel said. “But Charlie really wanted to be with him, and as a mother, I couldn’t help but let her have what she wanted.”

On the eve of the police operation, Liezel said she even warned Charlie that there was nowhere she could escape if anything happened in Airon’s house. Her words proved sadly prophetic. The following night, Charlie was killed inside Airon’s room.

The Commission on Human Rights had questioned the manner in which the crime had played. But Cavite police stand by their narrative, insisting that the group fired first, and that they were a known gun-for-hire gang.

For Liezel, the truth remained blurry even as her daughter has already been buried.  “I don’t really know what happened that night,” Liezel said. “I just know that my daughter was a minor.” – Rappler.com