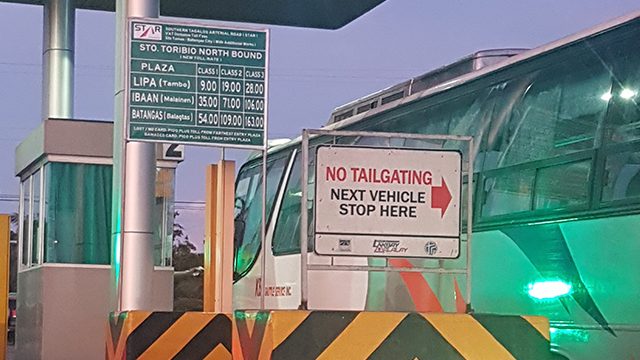 Facebook Twitter Copy URL
Copied
The Toll Regulatory Board, however, says it called for feedback through newspaper advertisements in May, and not through traditional public consultations

BATANGAS, Philippines – Increased toll rates at the Southern Tagalog Arterial Road (STAR), as provisionally approved by the Toll Regulatory Board (TRB), took effect on Monday, November 6, with motorists claiming they were not properly informed about it.

Locals who use the toll road on a daily basis were surprised when collectors informed them of the increase in payment. A collector said they were only told of the rate change the same day.

Even local officials claim they were not aware of the increase and was not invited to any public hearing.

“I am not aware of any public hearing or consultation re star toll fee increase.  I’m surprised myself,” said Deputy Speaker Raneo Abu, who represents the second district of Batangas. He said he is considering filing a resolution seeking a congressional investigation into the matter.

Batangas Governor Hermilando Mandanas said he would write the TRB to seek clarification on the increase.

Batangas Vice Governor Sofronio Ona said the matter was taken up by the provincial board during Tuesday’s session. “We were also surprised with the rate adjustment. We will find in the committee hearing if everything is above board.”

The management of STAR will be invited to shed light on the matter during the next session.

According to TRB spokesperson Bert Suansing, the board informed the public of the rate hike as early as May this year through the publication of the petition in major dailies as required by law.  He said the public was given 90 days to file their opposition and the board only received one from lawyer Ernesto Francisco.

“We did not conduct the regular type of public hearing where there is confrontation and grandstanding because when that happens the objective is not accomplished, but we asked the oppositors to file their opposition within 90 days as stated in the publication,” Suansing said.

He said the board only granted P0.67 per kilometer or a 41% increase versus the 80% increase or P1.36 per kilometer requested by the operator. The increase is supposed to go cover the improvement cost, including road widening and asphalt overlaying.

Suansing maintained that the TRB had been transparent about the increase in toll fees. While the 90-day period for opposition is over, he said the board would continue accepting any filings by concerned parties and would refer the, to the board for action. – Rappler.com