Pact on migrant workers’ rights is PH gift to ASEAN 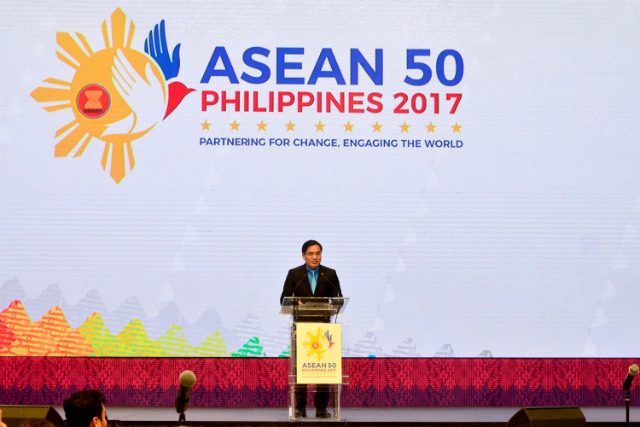 Facebook Twitter Copy URL
Copied
This 'is a centerpiece of the Philippine chairmanship' of ASEAN, says DFA spokesman Robespierre Bolivar

MANILA, Philippines – The Philippines is ending its ASEAN chairmanship with a gift to the region.

The bright spot of the Philippines’ chairmanship of ASEAN, or the Association of Southeast Asian Nations, is “the ASEAN Consensus on the Protection and Promotion of the Rights of Migrant Workers.”

ASEAN leaders will sign this consensus when they meet in Manila from November 12 to 14, said Philippine Department of Foreign Affairs (DFA) spokesman Robespierre Bolivar.

This “is a centerpiece of the Philippine chairmanship” of ASEAN, Bolivar said in a press briefing on Friday, November 10.

Back then, ASEAN leaders approved commitments under the ASEAN Declaration on the Protection and Promotion of the Rights of Migrant Workers.

This declaration was signed in Cebu in January 2007.

Bolivar said that the consensus signed this year “implements the commitments” contained in this 2007 declaration.

“One of the key features of this ASEAN Consensus on the Protection and Promotion of the Rights of Migrant Workers is for all countries in Southeast Asia to afford the same level of protection to migrant workers as they do to their own citizens in terms of labor contracts, labor standards, and all of that, access to say legal representation, especially access to consular representation,” the DFA spokesman said.

This consensus on migrant workers’ rights is significant for the Philippines, too, because more than 1.84 million Filipinos work abroad. (READ: What you need to know about overseas Filipino workers)

“All of these things come into play knowing that the Philippines, probably Indonesia and some other countries, are some of the biggest migrant sending countries,” Bolivar said.

From forming the declaration in 2007 to achieving a consensus in 2017, the Philippine chairmanship of ASEAN has “come full circle.”

“We had a declaration in 2007 the first time it came about, during the Philippine chairmanship in fact, and we are so pleased and honored that we are going to basically close the circle with this instrument the next time that the Philippines chaired ASEAN 10 years later, 2017,” Bolivar said.

Hans Leo Cacdac, chief of the Overseas Workers Welfare Administration (OWWA), said that the 2017 consensus “is a more detailed document.”

The action plan will be crafted in the 2018 meetings under the ASEAN chairmanship of Singapore.

Rappler reported in August that despite ASEAN’s decade-long intention to protect migrant workers in the region, undocumented labor migrants continue to endure hardships in silence.

ASEAN countries, after all, view the issue of undocumented migrant workers differently. Singapore and Malaysia view it as a “security threat” while the Philippines and Indonesia see it as a matter of “human rights,” according to a two-part Rappler special report. – Rappler.com