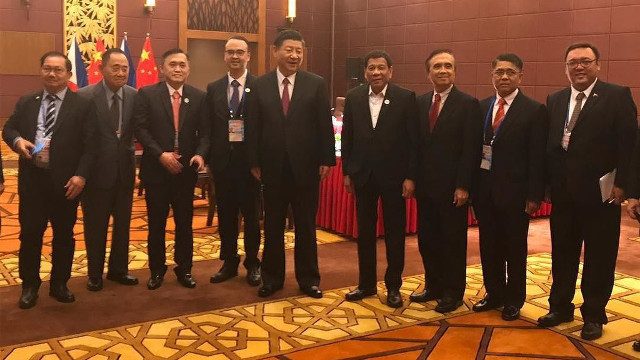 MANILA, Philippines – During his bilateral meeting with President Rodrigo Duterte, Chinese President Xi Jinping downplayed Beijing’s military build-up in the South China Sea and assured the Philippine leaders that China would respect other countries’ rights to free navigation through the key waterway.

Duterte relayed this in a news briefing upon his arrival at the Ninoy Aquino International Airport past midnight Sunday, November 12, where he reported on the results of his participation in the  Asia-Pacific Economic Cooperation (APEC) Summit in Danang, Vietnam.

Duterte said Xi had assured him that the increasing militarization in the South China Sea is “nothing.”

“I was talking about the military build-up. It’s nothing. He knows if he goes to war, everything will blow up. He acknowledged that war cannot be by anybody, it can only mean destruction for all of us,” said the Philippine leader.

Duterte apparently made good on his promise to convey to the Chinese leader the concern of Southeast Asian nations over whether they can safely navigate through the South China Sea given China’s set up of military facilities all over the disputed waterbody.

Duterte said Xi told him, “Do not worry, you have all the rights of safe passage. That will be applicable to all countries.”

The Philippine president claimed Xi expressed surprise over his stronger and more assertive tone in discussing the maritime dispute. Duterte assured him he only spoke that way since the Philippines is this year’s chairman of the Association of Southeast Asian Nations (ASEAN).

“He was quite surprised by my coming in very strong, of my statement, about the [Code of] Conduct in the [South China] Sea. I said I’m not raising any sovereign issue, do not worry, but I said as [ASEAN] chairman, I was made a tunnel of the communications, to be active,” he said.

“I had to do it because the Philippines chairs ASEAN, I cannot escape from that duty. I had every right to ask him. But I explained it to him in a very nice way that’s all there is to it,” Duterte added.

Duterte said there was even some banter between the two of them in which Xi appeared to make a light-hearted jab about how the Philippines seemed to be siding with another country.

“We were joking, just a banter between – ‘Ikaw kasi mas gusto mo ‘yung isa.’ Sabi ko, ‘Hindi. We look upon you as a country with an honor. I’m just trying to perform my duty as a chairman,” said Duterte.

(We were joking, just a banter between – ‘You like the other one better.’ I said, ‘No. We look upon you as a country with honor. I’m just trying to perform my duty as chairman.)

He said that he brought Armed Forces chief General Eduardo Año during the meeting with Xi, just to make sure that “if there are some military matters” discussed, someone on the Philippine side “with a military mind” would provide him “ready reference.”

Año, however, was not part of the Philippine delegation to Vietnam. Duterte was likely referring to new AFP chief General Rey Leonardo Guerrero who was present at the meeting with Xi.

As he had promised to do, Duterte said they discussed the need for a Code of Conduct in the South China Sea.

Xi, he said, spoke of a “multilateral summit” to get the work started.

“President Xi Jinping mentioned about a summit or meeting, multilateral, only to talk about the rules of conduct; it has nothing to do with sovereignty,” said Duterte.

ASEAN and China just completed a framework on the Code of Conduct in the South China Sea. They are expected to start work on the document itself.

Asked if he brought up the Philippines’ legal victory over China in the international arbritral tribunal in the Hague, Duterte reiterated that it was not yet the time for “aggression.”

But he reiterated his earlier statemement that “there will always be a time” to talk about the ruling in the future, without any specificity on the timeframe.

During their meeting, Xi also assured Duterte that construction on two bridges spanning the Pasig River in Metro Manila would “start immediately.”

In May, their countries inked a deal for a P3.6-billion grant from China to fund the Binondo-Intramuros Bridge and the Estrella-Pantaleon Bridge.

As is the custom in many bilateral meetings, Duterte again invited Xi to visit the Philippines. Xi, in turn, invited Duterte to visit China again.

Duterte said no specific date for Xi’s possible visit to the Philippines was given.

“Everything went smoothly and the President of China said he would honor what he promised,” he said in assessing his meeting with the Chinese leader.

Duterte described his meeting with Xi and Russian President Vladimir Putin as the “most productive” of bilateral meetings he had in Vietnam.

Both leaders, he said, reiterated their support for his controversial war on drugs.

“Both countries, through their presidents, reiterated: ‘We will support you and we will provide you anything you need to solve this problem of terrorism and drugs,’” Duterte said. – Rappler.com