Nov 21, 2017 1:38 PM PHT
Pia Ranada
Facebook Twitter Copy URL
Copied
'I can do that so that I can complain personally to the MRT people,' says President Spokesman Harry Roque 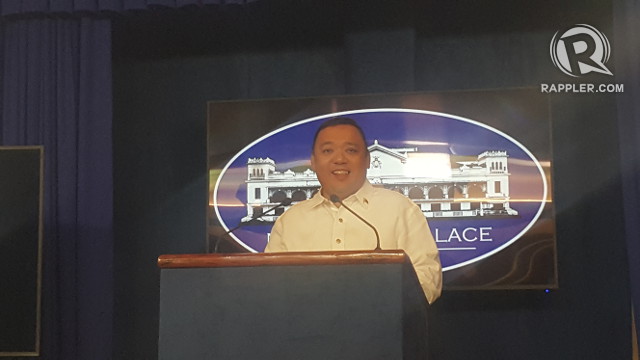 MANILA, Philippines – Asked several days in a row for Malacañang’s comment on the glitches plaguing the Metro Rail Transit Line 3 (MRT3), Presidential Spokesman Harry Roque said he might just take the problem-ridden train once a week to understand the commuters’ plight.

“All I can offer you is I can offer once a week to take MRT coming to work,” said Roque on Tuesday, November 21, during a Malacañang press briefing.

Responding to reactions of amused reporters, Roque claimed he has “always taken the MRT” because he is often late for appointments.

He might use the weekly train rides to personally inform MRT personnel of Malacañang’s sentiments about the train system’s problems.

One memorable instance when a high-ranking government official took a ride on the MRT3 was in August 2014, when Senator Grace Poe, who chaired Senate hearings on past MRT mishaps, took the train from North Station in Quezon City to Taft Station in Pasay City.

Train ride idea aside, Roque still had to respond directly to reporters’ questions about the MRT3 crisis.

Asked if the Duterte government has a deadline for solving MRT woes, he said, “It’s very difficult to set a deadline but I think Secretary Tugade knows we’re looking up to him for a solution, we’re crying for a solution.”

He said the Department of Transportation is “taking all necessary” steps but asked for the public’s patience as the government deals with “legal quicksand.”

Roque was referring to complications arising from the contracts the previous administration had signed with  Busan Universal Rail Incorporated (BURI) to implement the maintenance contract of the MRT3.

Earlier that day, the DOTR filed a plunder complaint against former transportation chief Joseph Abaya and other top officials of the administration of Benigno Aquino III over alleged anomalous contracts. – Rappler.com