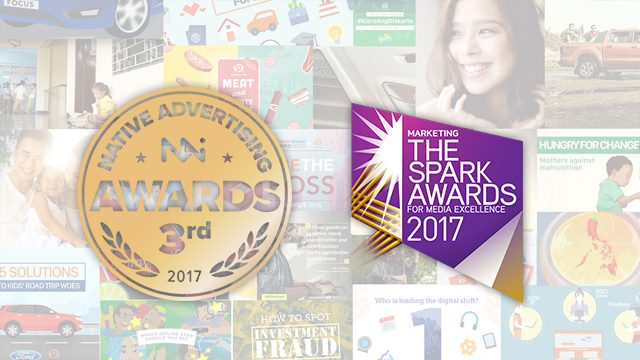 ‘Built Tough’, a campaign for Ford that told stories of toughness featuring Amanda Fernandez of Sparta, Kian Kazemi of Kite Kebab, and Raf Dionisio of The Circle Hostel, scored a bronze at the Native Advertising Awards last November.

The Spark Awards, organized by Marketing magazine, is the region’s “premier programme that celebrates the best media solutions, products, and services.” The award winners serve as a powerful benchmark for trustworthy and effective partners in the region.

BrandRap’s small team of 15 has produced numerous award-winning campaigns with partner brands including #WhipIt, #BeTheBoss, #ClimateActionPH, and #WonderfulPH since it started five years ago. The BrandRap section was created to help brands tell their stories without compromising the credibility and journalistic standards being upheld by Rappler.

Rappler, through BrandRap, was one of the pioneers of branded content in the Philippines, combining its strengths – journalism, technology, and social network – to create meaningful stories and pieces of content that ripple.

Since it started in 2012, Rappler’s revenue and innovative executions have grown through BrandRap’s efforts. With new capabilities like audience-targeting and data science that will help brands tell better stories to the right people, it’s only expected to grow in the coming years. – Rappler.com