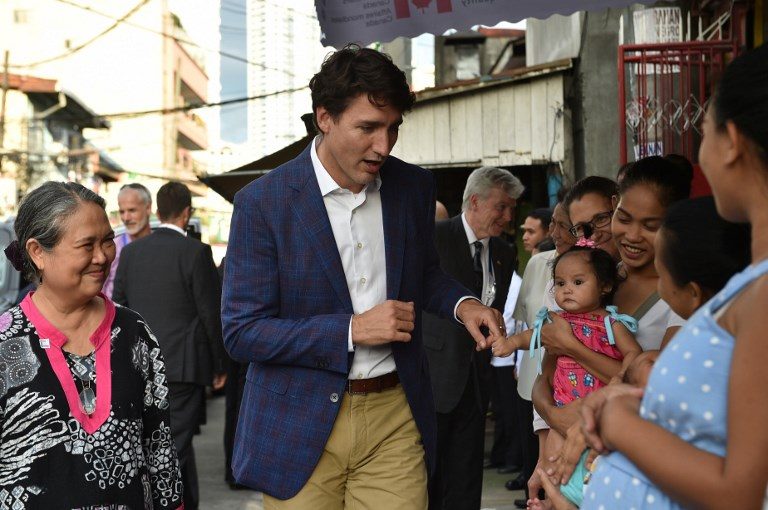 Facebook Twitter Copy URL
Copied
The number of Filipinas who die from complications of giving birth remains high, according to the United Nations figures

MANILA, Philippines – At age 33 and raising six children in a slum named “Paradise Village,” Myrna Albos is Exhibit A for the Philippines’ serial family planning failures.

The plumber’s wife already had four children by the time a family planning law or the Reproductive Health (RH) Law was passed in December 2012, but she had two more after opponents blocked it and the government health center near her shanty ran out of birth control pills.

“I don’t want any more (children). Sending all of them to school is an effort. One more and I may no longer have time for myself,” the former department store clerk told AFP.

Albos and her family live on her husband’s $10-a-day (P500) wage in a dirt-floor home in Paradise Village, tucked behind a smelly open sewer in the north of Manila, the nation’s capital where millions live in brutal poverty.

The RH law was meant to provide free condoms, birth control pills, implants and other family planning methods to couples in poor communities, while protecting mothers from death and other health risks associated with pregnancies.

The RH law was hailed then as a big victory for the rights of the poor, finally overcoming the powerful Catholic Church and their socially conservative allies in Congress.

The Philippines, a former Spanish colony, is the Church’s Asian bastion with 80 percent of the nation’s 103 million people Catholic. The power of the Church, has helped to ensure abortion and divorce remain illegal.

The country’s fertility rate slowed to 2.33 births per woman in 2015 from a runaway six in the 1970s, United Nations data shows but it remains an outlier.

The number of Filipinas who die from complications of giving birth also remains high, according to the UN figures.

However the legislation turned out to be only the start of another long battle.

The RH law itself did not come into force until April 2014, as it was delayed by legal challenges.

While the Supreme Court ruled the legislation was constitutional, it defanged the RH  law by removing penalties for officials and workers who refused to provide contraceptives.

It has since been weakened further after some conservative legislators gutted its funding.

“We have not taken off. We’ve been taxiing for the last five years,” Health Undersecretary Gerardo Bayugo told AFP in an interview, when asked to assess the program.

He said the Supreme Court’s removal of the penalty provisions had rendered the RH  law “basically toothless”, while a lack of funds meant the government could not buy enough contraceptives.

President Rodrigo Duterte, who took office last year, has followed in his predecessor’s footsteps in trying to get contraceptives to the masses.

His Food and Drug Administration (FDA) this month ruled that dozens of contraceptives, including implants and pills, were not abortion inducing and thus the government could distribute them for free.

Condoms were not subject to the challenge but only two percent of Filipino men use them, according to the health department. This is partly due to men not wanting to use them, and their expense.

Church-backed groups filed a case with the Supreme Court in 2015 insisting the implants and other contraceptives were abortifacients, and thus unconstitutional.

The Supreme Court then ordered the government not to distribute those contraceptives until the FDA made its own ruling on the issue.

Bayugo said the government had started to deliver 500,000 implants, the vast majority of its stocks, following this month’s FDA ruling. But he said it was not nearly enough to tackle the problem.

“The resolution will not cure the funding issue… it’s been our problem for the last five years,” he told AFP.

The health department estimates six million couples need contraceptives, but have no reliable access to them.

This year’s allocated budget of P165 million ($3.2 million) is only enough for two million of these couples, according to Bayugo.

The health ministry has sought a budget of P342 million for next year. But this is still less than a third of what the government deemed necessary to fully implement the RH law.

And with less than six weeks left in 2017, Congress has yet to approve next year’s family planning budget.

While the government was banned from dispensing implants, Albos the slum mother, went to Likhaan, a charity that receives foreign funding.

She finally had an implant, which releases a hormone that prevents women’s ovaries from releasing eggs, after her sixth child was born this year.

Non-government groups including Likhaan have been providing birth control services to about 150,000 people falling outside the health department coverage, its executive director, Junice Melgar, told AFP.

But even their own modest programs have suffered setbacks that highlight the enduring political problems.

The women were scared off by a politician’s unfounded warnings the implants caused cancer, polio and even blindness, they said. – Rappler.com