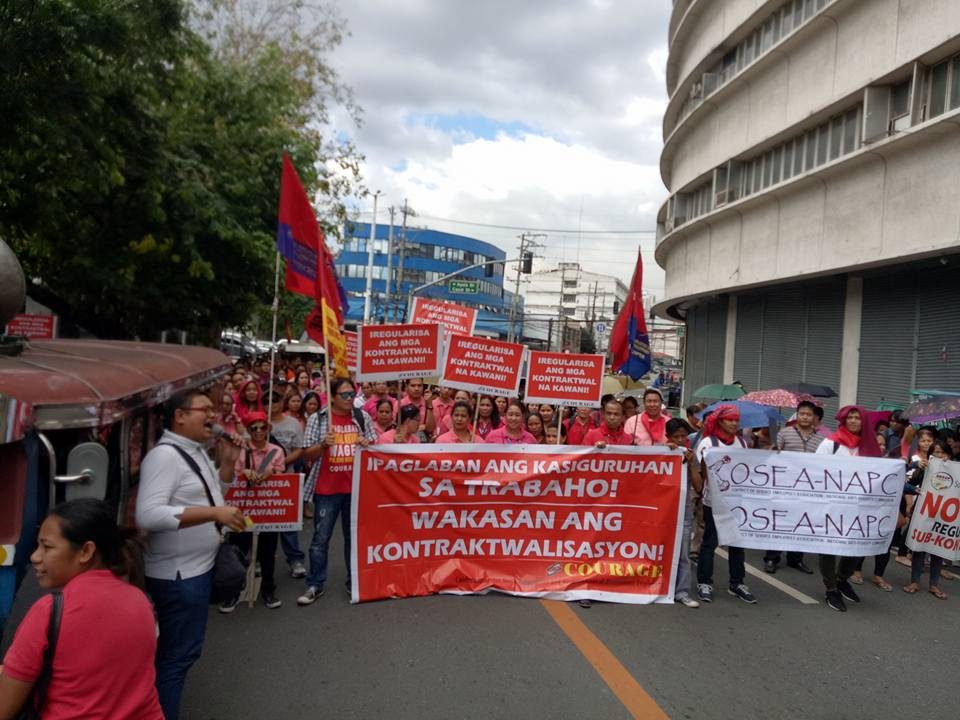 Facebook Twitter Copy URL
Copied
(UPDATED) Job order and contract of service workers will be hired through manning agencies by 2019 under Joint Circular 1 released by the Department of Budget and Management, Commission on Audit, and Civil Service Commission

MANILA, Philippines (UPDATED) – In 400 days, employment of contractual government workers will be transferred to manpower agencies.

Government workers, mostly from the Department of Social Welfare and Development (DSWD), lamented this as they went to the Department of Budget and Management (DBM) on Monday, November 27, to call for their regularization.

The protest stems from Joint Circular 1 issued by the DBM, the Commission on Audit (COA), and the Civil Service Commission (CSC), which prompted government agencies to review their structure and identify the appropriate manpower they need.

This assures that job order (JO) and contract of service (COS) workers will be priorities for filling up vacant plantilla positions. But what the workers fear is the provision that allows the renewal of their employment only until December 31 next year. By 2019, they will be hired through private agencies – a notorious practice in the private sector.

(This is not according to the Constitution which states that Filipino workers have the right to job security. Subcontractualization is not what we want. We want regularization.)

Baclagon said the scheme would not just perpetuate “endo” (end of contract) in government but also open opportunities for agents to earn from public coffers.

“What we need is less corruption in the government. Government officials are the ones earning from our service and taxes that we work hard for… We need more social services and these will not be delivered without government workers,” he said in Filipino.

Another SWEAP member, Eduard Kyu Jr said that there is still no assurance that the JOs and COS workers will be hired as regular employees due to “budgetary limitations, the threat of rightsizing, and DBM’s hindrance to approve more plantilla positions.”

Based on the CSC’s 2016 audit of the bureaucracy, there are 2.4 million workers in government. One public sector worker attends to 42 Filipinos, pegged at the 100.98 million Philippine population as of August 2016.

The number of JO and COS workers recorded was at 592,162 – nearly a quarter of the whole workforce. They are those hired through a term-based arrangement without benefits and tenure even if many of them have been in government service for at least a decade.

They are also ineligible to receive Christmas bonuses because they do not have an employee-employer relationship with the government, the DBM clarified.

Former social welfare secretary Judy Taguiwalo earlier found that the Department of Public Works and Highways (DPWH) employs the most number of COS workers at 34,259. The DSWD follows with 16,558 and the Department of Health (DOH) comes in 3rd with 16,200 contractual nurses. – Rappler.com