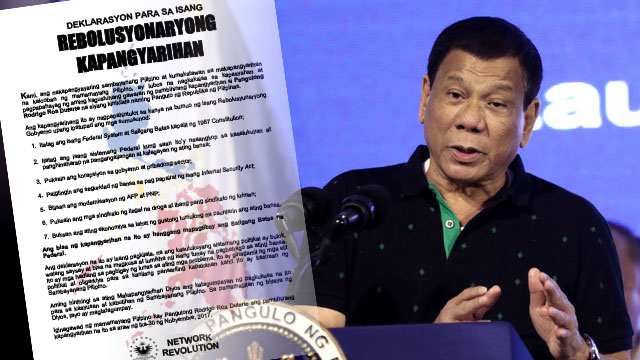 MANILA, Philippines – Crowds are expected to gather in key cities and towns nationwide on Thursday, November 30, pushing for clashing causes.

As the country commemorates the 154th birth anniversary of Andres Bonifacio, father of the Philippine revolution against Spanish colonizers, supporters of President Rodrigo Duterte are staging rallies to support his call for the establishment of a revolutionary government.

Progressive organizations, meanwhile, will be holding rallies and caravans to protest various issues they feel the government has failed to address or has mishandled, as well as oppose the proposed revolutionary government for the dangers it poses to democracy. (LIST: Bonifacio Day activities, protests)

A group calling itself the Network Revolution, which has circulated advisories and statements online, will stage rallies in Mendiola near Malacañang in Manila, and in 18 other cities and municipalities across the country, mostly areas where Duterte won in the 2016 presidential election:

According to one of the group’s representatives, actress Vivian Velez, the group is a “link-up network” for all Filipinos who want Duterte to exercise his “full powers” by declaring a revolutionary government. The group’s primary goal, according to Velez, is to transition to a federal government and to deliver on his campaign promises.

It is unclear how the group was formed or whether there are government officials behind it.

In Davao City, the rally is being organized by local businessman Philip Dizon, a close friend of Duterte’s. It will take place at Crocodile Park Concert Grounds, which the businessman owns.

“To link up with Network Revolution, you must be fully convinced that real change cannot be achieved thru the normal processes within a rotten system and government,” Velez said in a Facebook status.

The network said it has scheduled protests as well in Hong Kong, Tokyo, Kuala Lumpur, and New York.

Online, they will unite with the hashtags #NetRev and #RevGovNa.

Dizon, the organizer in Davao, was one of the two people who wrote a letter to President Duterte inviting him to join the said rally. The other one is Moro National Liberation Front (MNLF) Davao City chair Abdul Aziz “Rolando” Olamit.

“The grand rally for federalism is our solution to achieve federalism,” Olamit said in a Facebook video posted on Monday, November 27.

Ebrahim said this would reduce “complication” in the government’s negotiation with the Moros in passing the Bangsamoro Basic Law, because that would mean the MNLF would no longer push for its own version of the bill.

“Please accept the sovereign’s grant of revolutionary powers where you are to exercise both executive and legislative powers…the country is on bended knees pleading for your acceptance,” said Joel Obar, spokesperson of the Network Revolution, said in a statement addressed to the President.

However, not everyone in Duterte’s hometown is in favor of the call to revolutionary government.

She reminded Duterte that he already has the mandate, given through a democratic election in 2016, and that he even has the support of the House of Representatives and the Senate, and has the backing of the judiciary, the military, and the police.

“You are destabilizing the government that you helped put in place,” she said in a statement.

Meanwhile, leftist organizations are also mounting protests in Davao on Thursday. Carlo Olalo, secretary general of the Kilusang Mayo Uno (KMU) in southern Mindanao, said they were expecting around 3,500 protesters.

KMU and other groups, such as the Bagong Alyansang Makabayan, will burn a Duterte effigy, which they call the “Duterminator,” to symbolize their anger over the President’s “hostility” toward those who speak against his administration.

Duterte recently said he would arrest members of “legal fronts” of the Communist Party of the Philippines following the formal termination of the talks with the National Democratic Front.

In Bacolod City, around 3,000 people are expected to join the rally to urge the President to declare a revolutionary government.

Edsel Vaflor, secretary-general of RevGov in Western Visayas, said there’s a clamor from the people to push for a revolutionary government.

He said a website will be set up to get the people’s votes and reaction to the proposed movement.

Retired Senior Police Officer 1 Rex Noble, chairman of RevGov in Western Visayas, said democracy had been abused by the Filipinos, resulting in corruption in government.

“We see Duterte as the guy we have been aspiring for because he is the only president who has been all out in the campaign against illegal drugs and corruption,” he added.

Negros Occidental Governor Alfredo Marañon Jr has also said he is supporting a revolutionary government, but on one condition: “I will support it, but there should be a guarantee that there will be change.”

He said the overhauling of the system should be done down to the barangay officials.

The governor said a revolutionary government is not scary and “we have to see to it that it is not abused.” He said absolute power, if exercised properly, is good. He said those who will abuse it should be held accountable.

Earlier, Duterte threatened to declare a revolutionary government if his critics continue to sabotage his administration. – with reports from Rambo Talabong, Mick Basa, and Marchel Espina/Rappler.com