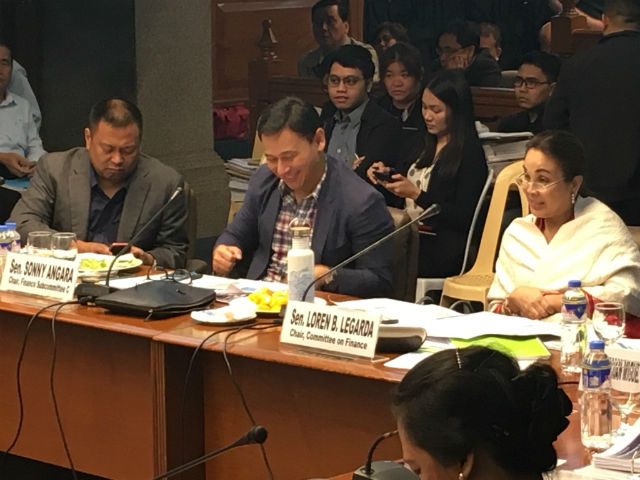 All 16 senators present voted in favor of the measure after marathon hearings and deliberations. The decision came two months after the House of Representatives approved the bill.

Senator Loren Legarda, main sponsor of the measure and Senate finance committee chairperson, thanked her colleagues for the support during deliberations.

“This is a beautiful, great experience, even if I have to sacrifice my personal leisure time, 6 months in a year starting August to December. I would not change the experience,” Legarda said.

Minority Senator Risa Hontiveros, for her part, explained that she voted in favor of the Senate version of the budget as it excludes allocation for the drug war of the Philippine National Police (PNP).

During deliberations, Hontiveros moved that the P900 million for Oplan Double Barrel as well as the P500 million for the Masa Masid program of the Department of the Interior and Local Government (DILG) be realigned.

Legarda said the funds for the two programs were realigned for the housing of police and soldiers, as well as body cameras for cops.

(We channeled the funds to our soldiers and police, body cams as well. There’s no more Masa Masid, Double Barrel.)

The DILG earlier agreed to the realignment of the budget of the Masa Masid program, which was meant to enhance drug and crime reporting in barangays, using drop boxes, among others. (READ: In Senate debate, DILG vows to ‘drop’ drop boxes for drug reporting)

“I thank this body for ensuring that the budget does not support the bloodthirsty impulses of the strategists of the war on drugs… This sends a clear signal to the Executive that human rights violations and constitutionally-infirm state policies will not be financed,” Hontiveros said.

“This monster will not be fed. This will, thankfully, be a TokHang-free budget,” she added.

Drilon said “it is best to shed some light into the budget” to ease concerns of alleged “pork” in the budget.

“May I propose that the good sponsor submit in plenary the justifications for the amendments that are over P1 billion?” Drilon asked Legarda, who agreed to provide justification for her committee’s proposals.

Drilon also asked the panel “to submit to each member of the Senate, and for the record, the nature and purpose of these changes in the agencies’ budget, particularly those with over P1 billion in addition.”

“We cannot leave our people in the dark as it would only fuel speculations that pork barrel is still thriving despite the Supreme Court’s decision declaring it unconstitutional,”  he added.

Drilon cited the P1.65-billion addition to the proposed budget of the Department of the Interior and Local Government, where the PNP budget is lodged, and the P1.49-billion increase in the Bureau of Customs budget.

The Philippine Drug Enforcement Agency, which had been tasked to lead the Duterte administration’s controversial war on drugs, is proposed to get an additional P1.21 billion in its budget.

Some key agencies, however, suffered big budget cuts. In the Senate version, the Department of Public Works and Highway budget decreased by P26.4 billion, while the Department of Environment and Natural Resources budget was reduced by P1.84 billion.

“We would like the committee to submit for the record the additions and deductions made and what programs are affected,” he said.

Both chambers of Congress are set to convene into a bicameral conference committee on Thursday, November 30, to thresh out differences between their versions before President Rodrigo Duterte signs it into law.