Dec 11, 2017 10:45 AM PHT
Pia Ranada
Facebook Twitter Copy URL
Copied
The Presidential Spokesman calls out the senator and CHR chairman for insisting there are extrajudicial killings under the Duterte administration when they supported a definition of EJK victims that excludes drug suspects 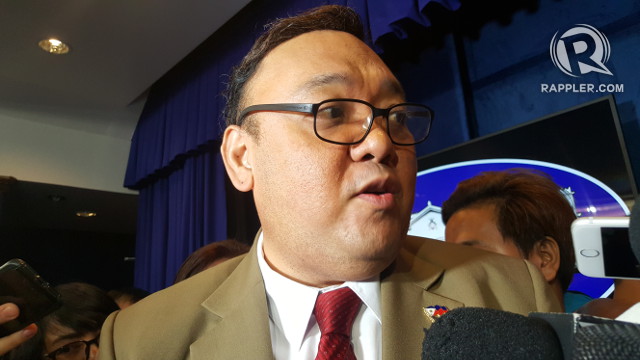 MANILA, Philippines – Presidential Spokesman Harry Roque criticized Senator Leila De Lima and Commission on Human Rights (CHR) chairman Jose Luis Martin “Chito” Gascon for insisting there are extrajudicial killings under the Duterte government, when they had backed a definition of the term that excludes summary killings of drug suspects.

This, said Roque, is the “hypocrisy” underlying the statements of De Lima and Gascon, critics of President Rodrigo Duterte’s drug war.

De Lima, as justice secretary under the Aquino administration, had signed the operational guidelines for implementing Administrative Order No 35 which gave a definition of extrajudicial killings that excludes the killing of drug personalities.

For the CHR, it was its former chairperson Loretta Rosales who served as “observer” when the document was signed, not Gascon.

The guidelines defined extrajudicial killings (EJK) as killings in which the victim is a member or affiliate of an organization, including those with political, environmental, agrarian, labor, or similar causes; or is an advocate of such causes. The victim can also be a media practitioner.

An EJK victim, according to the document, may also be someone “apparently mistaken or identified” to be any of the above.

That De Lima and Gascon are not adhering to the AO’s definition of EJK exposes the politicized nature of their criticisms against Duterte’s drug war, said Roque.

“If the two believed then that the AO they adopted was correct and in accordance with the law, they should be the first to defend the Duterte administration’s campaign against illegal drugs because the AO No. 35 signed by former President Benigno Aquino III is correct,” said Duterte’s spokesman.

However, if the two vocal critics do not agree with the definition made by Aquino’s AO, they should “admit to the nation and to the world that what they did…was wrong and that Aquino only signed AO No. 35 so that his administration would not be blamed for the deaths of drug pushers and users during his presidency,” he said.

“It is high time that the hypocrisies of Senator De Lima and Chairman Gascon are exposed in favor of the truth.  The Filipino people deserve no less,” said the Palace spokesman.

The CHR had previously assailed the use of the AO’s definition for extrajudicial killings, saying it is “limiting” and discounts other killings perpetrated by state agents and non-state actors.

This was after the Philippine National Police used the AO definition as basis for saying there have been zero cases of extrajudicial killings under the Duterte administration.

The commission sticks to the definition provided by former United Nations Special Rapporteur Philip Alston – that the term extrajudicial killing refers to “any killing by government forces as well as killings by any other groups or individuals which the government fails to investigate, prosecute, and punish when it is in a position to do so.” – Rappler.com