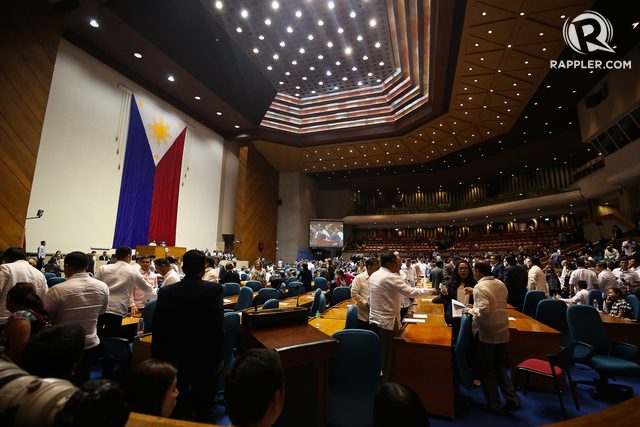 Facebook Twitter Copy URL
Copied
The Senate and the House of Representatives will tackle the request of President Rodrigo Duterte on Wednesday, December 13

MANILA, Philippines – Congress is set to convene a joint session on Wednesday, December 13, to discuss President Rodrigo Duterte’s request for a one-year extension of martial law in Mindanao.

The session would be held at the House of Representatives in Quezon City.

Pimentel said the senators would have a security briefing on Tuesday morning, December 12, which would be followed by briefings with the Commission on Human Rights (CHR) and the National Economic and Development Authority (NEDA).

“[We will have briefings with] the martial law administrator, then at 12 noon human rights and NEDA so we have the human rights angle and the economic angle,” Pimentel said in a mix of English and Filipino.

Congress is set to adjourn on Friday, December 15, for its Christmas break. On top of the martial law issue, the Senate and the House have yet to pass the proposed 2018 national budget and the first tax reform package.

Both measures are still in the bicameral conference committee, where they are set to be finalized before being submitted to Duterte for signature.

Duterte has asked Congress to extend martial law in Mindanao by one year to “totally eradicate” Islamic State-inspired terror groups.

In his letter, sent to media on Monday, Duterte requested that martial law and the suspension of the privilege of the writ of habeas corpus be extended from January 1, 2018 to December 31, 2018.