Duterte slams Ridon’s foreign travels: ‘You had too much, too soon’ 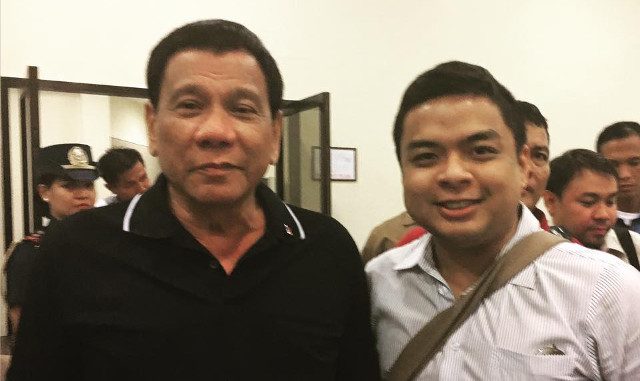 Facebook Twitter Copy URL
Copied
(UPDATED) 'He travelled about 7 times and to think that the office is an urban poor agency, I simply cannot,' says President Rodrigo Duterte about the PCUP chairman he just fired

MANILA, Philippines (UPDATED) – “You had too much, too soon.”

This was President Rodrigo Duterte’s message to Presidential Commission for the Urban Poor chairman Terry Ridon on Tuesday, December 12, just hours after he was fired.

Duterte elaborated on his accusations against Ridon during his speech at the 2017 Presidential Awards for Child-Friendly Municipalities and Cities in Malacañang.

“He was appointed September, he travelled about 7 times and to think that the office is an urban poor agency – I simply cannot,” said the President, adding that he had no “personal” grievance against Ridon.

“I cannot understand why you have to be there at every powwow in every international scene. We cannot afford it,” said Duterte.

But Ridon supposedly travelled with officials from other agencies as well, including the National Housing Authority and the Office of the Cabinet Secretary.

These were for international conferences related to poverty alleviation and development.

Ridon, in a statement, said that the trips were approved by Malacañang.

If Ridon has been axed for such “junkets,” why not the other officials?

Duterte also said he fired the PCUP officials because they supposedly failed to meet regularly as an en banc.

“One is because it’s a collegial body and I have heard that they never had had any hearing except for one or two,” said the President.

PCUP met en banc only twice, in April and in November this year. – Rappler.com