LIST: How the House voted on martial law extension in Mindanao 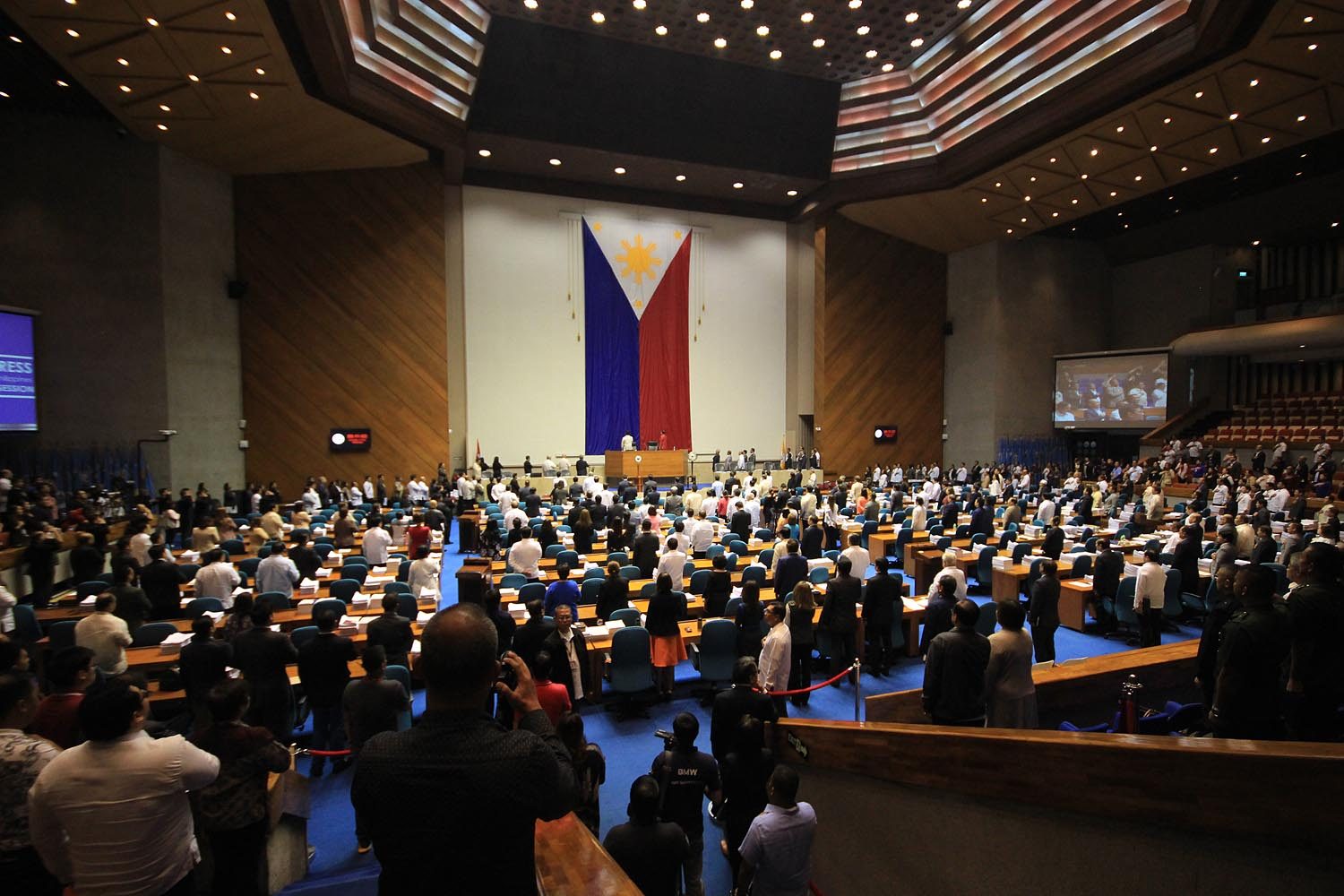 Facebook Twitter Copy URL
Copied
How did your representative vote on the request to extend martial law in Mindanao?

Congress on Wednesday, December 13, voted in favor of extending the proclamation of martial law and the suspension of the privilege of the writ of habeas corpus in Mindanao, as requested by President Rodrigo Duterte.

During a joint session of the House and the Senate at the Batasang Pambansa, 226 members of the House voted in favor of the extension while 23 voted against it.

Martial law and the suspension of the privilege of the writ of habeas corpus in Mindanao will remain until December 31, 2018.

Duterte’s request came months after he declared Marawi City “liberated” from terror groups that overrran it in May 2017. But Duterte and his top security officials say that even members of the Maute and Abu Sayyaf group are no longer in Marawi, they still need martial law to quell any other possible attacks elsewhere in Mindanao.

Here’s a partial list of how members of the House voted, including their explanations as sent to media:

1-Ang Edukasyon Representative Salvador Belaro Jr: Schools all over Mindanao must be secured and protected against both terrorists and common criminals. Campuses must remain zones of peace and safe zones even with martial law in place. Safety and security of students and teachers must be assured during martial law.

BH Representative Bernadette Herrera-Dy: Government must, while there is martial law, mobilize all public information officers of all its agencies in Mindanao to help the military wage the information campaign. In the hearts and minds of Mindanaoans, we must build the defenses of peace. The psywar must run parallel to the military campaign on the ground.

Davao City Representative Karlo Nograles: Martial law under the current administration is vastly different from what was witnessed in the country decades ago. In Mindanao, martial law helped in shielding the people from the clutches of the most feared terrorists in the world. Our residents acknowledge this and want to continue the heightened sense of security so we can continue living our lives free from fear….Aside from helping government troops crush the estimated 1,000 ISIS-inspired Maute Group, martial law has also proven to be an effective tool in quelling the spread of violence, rebellion, terrorism and criminality in the entire region.

With the extension of Martial Law, we hope our government security forces will now succeed in overcoming the core and root cause of rebellion and terrorism in Mindanao.

At any rate, Congress will keep its eyes open on how our troops will handle the developing situation in Mindanao. We won’t hesitate to put our foot down in the event that they veer away from President Duterte’s blueprint for peace and development in the region.

1-PACMAN Representative Michael Romero: It is clear that the Maute-ISIS terrorists have not yet been exterminated. It is also clear how the BIFF, the NPA, and other terrorist forces are taking advantage of the security situation in Mindanao. We need a strong economic war on the root causes of the rebellion and terrorism, particularly in Mindanao. The roll out of the 2018 budget and other ways to address poverty will be adversely affected if the people who will make the programs happen cannot be adequately secured.

Iligan City Representative Frederick Siao: As a Mindanaoan and Iligan City congressman, security and political stabiity are among my top concerns. Recovery and rehabilitation efforts for Marawi will not prosper if people’s safety is not assured and remaining pockets of terrorism are not quashed. I am for extending martial law in Mindanao by one year.

Mindanao is ready to forge ahead as the new economic powerhouse of the Philippines, not just in agriculture, but also in manufacturing, services, and tourism. The security and safety of workers, investors, tourists will be assured in the short term by martial law extension and in the long term  by political solutions such as the BBL, progressive charter change, and move economic legislation empowering local governments and creating jobs.

CIBAC Representative Sherwin Tugna: The continued existence of rebellion in Mindanao justifies the extension of martial law.  Several events, that occurred in other areas in Mindanao and not only confined in Marawi City, show that rebellion still exists in Mindanao.

With the extension of Martial Law in Mindanao, I will take this opportunity to commend the AFP in regaining Marawi from the terrorists.  However, let me just remind the military about a familiar phrase everybody knows “with great power comes great responsibility.”  The Martial Law Rule gives the military power to easily apprehend suspected rebels because rebellion has become a continuing crime.  They can apprehend without a warrant of arrest.  Also, the suspension of the privilege of the writ of habeas corpus has extended the right to detain arrested rebellion suspects for a period of 72 hours, or 3 days, from the usual 36 hours.  Another effect of the imposition of Martial Law is the restriction of some constitutional rights such as the right to privacy of communication, the right to travel and the right to liberty of abode.

With this, I vote to grant the extension of Martial Law kasama ang mga nasabi kong bagay na dapat tandaan.

Voted NO to martial law extension:

Magdalo Representative Gary Alejano:  Alejano cited 11 reasons to explain his votes, even as the former military officer expressed his to the military “and anything that would make them effective in the performance of their mandate.” His reasons include the fact that the Marawi crisis is over, and an extension is unconstitutional since there is no “actual rebellion or invasion” or a situation that calls for it to ensure public safety. He also said “martial law is not equivalent to combat operations” and that government forces can run after terrorists and arrest them even without the imposition of martial law. Among the other reasons he cited are the following:

However, the larger war against terrorism will not be ended with Martial Law as the sole solution. Our soldiers deserve a better strategy to carry out their duty to protect our citizens – citizens in Mindanao who have been greatly affected by the conflict….

We do not need Martial Law in Mindanao. We need better military intelligence. We need quicker military response. We need active citizenship in our communities. We need to institute structural reforms. We need a strategic response, and not just be comfortable with the shortcuts offered by Martial Law and the shrinking of democratic and political rights of citizens – of Filipinos – in Mindanao….

Mr Speaker, Mr President, I vote NO to another extension of martial law and the corresponding suspension of the privilege of writ of habeas corpus over the whole of Mindanao, this time for a year. I vote no to the normalization of military rule and of authoritarianism. I vote no to efforts to weaken our democratic institutions. I vote no because I fear that we are falling into a pit we may not be able to get out of.

We all agree: this is a constitutional issue. Serious security concerns call for intensified intelligence and operational efforts on the part of the military; but it is not reason to call for an extended martial law. Our power to determine the period of an extension of a declaration of martial law is conditioned upon persisting conditions of actual invasion or rebellion. Mere threats or perceived threats to security do not justify martial law.

When it was announced that Marawi was liberated from terrorist forces, the factual bases for martial law ceased to exist. Martial law should have been lifted, not extended. Furthermore, martial law will not solve the real historical, cultural, political, and economic problems of Mindanao, and our nation.

Albay First District Representative Edcel Lagman: An extension of the period of martial law in Mindanao even for one day, much more for one full year, has no factual anchorage and constitutional basis.

Aside from the cavalier assertion of the military and police authorities that there is a “continuing rebellion” in Mindanao, there is no well-documented support for such contrived submission.

Moreover, a series of extensions would defy the clear intent of the Constitution for a limited period of martial law and its extension, wherein the initiatory proclamation should not even exceed 60 days. Any extension is subject to the same constitutional constraints on the limited period.

Consequently, I vote against the extension of the period of martial law in the entire Mindanao.