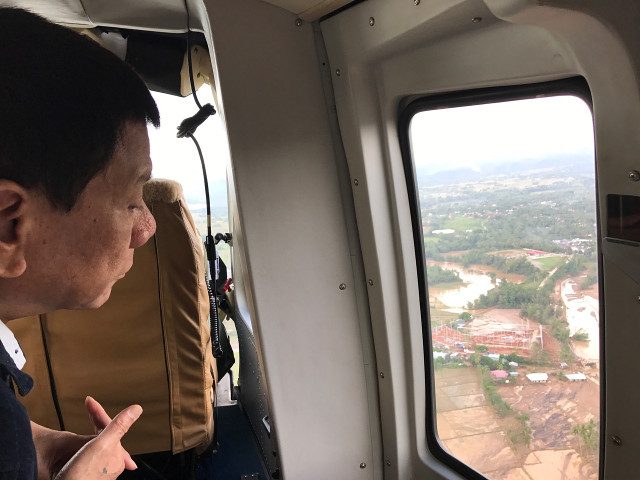 MANILA, Philippines – President Rodrigo Duterte began his week with a visit to Biliran, one of the provinces reeling from devastation wrought by Tropical Depression Urduja (Kai-tak).

On Monday, December 18, Duterte listened to a situation briefing in Naval town where he was informed of the status of rescue and relief operations.

Also present were the governor and mayors of Biliran.

“He, of course, condoled with the victims of [Tropical Depression] Urduja and  pledged that government will do everything it can to help Biliran rise again,” said Roque in a statement to media.

Told that food supplies in Biliran may be gone by the end of the day, the President said he would order the Philippine Air Force to airlift more provisions.

Roque said Duterte ordered the Department of Public Works and Highways to finish repairing two damaged bridges in Naval in “lesser than 30 days.”

He also instructed the Department of Trade and Industry to be vigilant about the overpricing of essential goods.

To Año, the President expressed concern for the 49 persons who are still missing due to the storm. At least 31 others have been confirmed dead.

“He directed [the Department of the Interior and Local Government] to intensify rescue operations for individuals who are still missing, and also conveyed his condemnation of the [New People’s Army] attack on humanitarian soldiers engaged in humanitarian work in Samar, reiterating that this is the reason why he has opted to cease all talks with the NPA,” said Roque.

As for damage to agriculture, Duterte suggested that provinces in Eastern Visayas like Biliran, often in the path of storms from the Pacific Ocean, shift to planting crops that could withstand such weather, instead of palay.

Before the briefing, Duterte and Special Assistant to the President Bong Go went on an aerial survey of areas affected by Urduja aboard a chopper. – Rappler.com