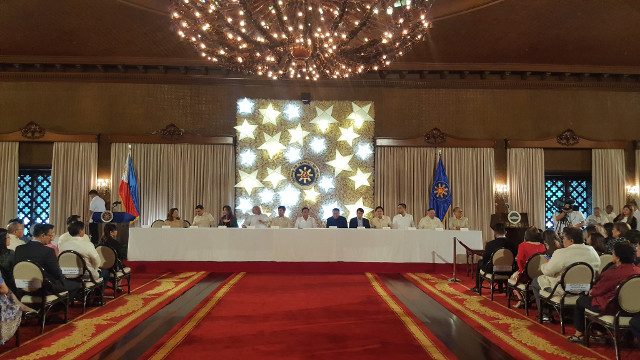 In a Malacañang ceremony in which he also signed into law the first tax reform package, Duterte announced he was vetoing certain items in the budget which was ratified by Congress on December 12.

As of writing, Duterte’s veto message has not yet been sent to media.

The budget, he was also pleased to say, is a fulfillment of his campaign promise of “doubling the basic pay of our soldiers and police officers.” He said this would take effect on the “very first day of 2018.” (READ: What’s the share of gov’t offices in the 2018 P3.8-T national budget?)

In the 2018 national budget, the Department of Public Works and Highways (DPWH) enjoys a lion’s share of the funds with its allocation of P637.86 billion ($12.66 billion).

This is in line with the Duterte administration’s goal to allot P8.1 trillion ($16.08 billion) for infrastructure from 2017 to 2022 as outlined in its Build, Build, Build program.

However, Senator Panfilo Lacson had wanted to slash P50 billion from the DPWH’s budget, citing right-of-way issues. After lawmakers from both chambers opposed this, the budget was restored.

An additional P11 billion was even given but not without Lacson asking for a breakdown of the projects to be funded by the amount.

Senator Loren Legarda, chairperson of the Senate finance committee, assured Lacson she would provide the list of projects.

The Department of Education (DepEd) received the next highest allocation at P553.31 billion ($10.99 billion). The funds will be used to establish and maintain facilities; hire teaching and non-teaching personnel; as well as develop and provide learning materials to students. (READ: FAST FACTS: What you need to know about the PH education system)

Meanwhile, the Department of the Interior and Local Government (DILG) received an allocation of P170.76 billion ($3.39 billion) for 2018.

DILG funds will be used for improved police operations, with some P334 million ($6.63 million) allocated for the purchase of body cameras for the Philippine National Police (PNP) and an additional P850 million ($16.88 million) for maintenance and other operating expenses of police stations.

Funds that the Duterte administration had proposed for anti-drug campaigns of the DILG and the PNP were removed from the 2018 national budget.

The P900 million originally intended for the PNP’s Oplan Double Barrel was also scrapped and reallocated for the housing of police and soldiers, as earlier proposed by Senate Minority Leader Franklin Drilon.

The CHR’s budget remains to be the second lowest among government offices since 2017, next to the Office of the Vice President (OVP) budget of P543.95 million ($10.8 million).