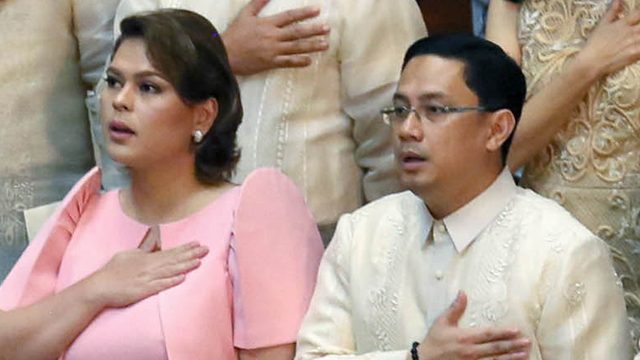 MANILA, Philippines (UPDATED) – Presidential daughter and Davao City Mayor Sara Duterte-Carpio is among the top contenders in the May 2019 senatorial elections, based on two surveys obtained by Rappler on Wednesday, January 3.

She joined the Magic 12 in surveys conducted by polling firms Social Weather Stations (SWS) in December 2017 and Laylo Research Strategies in November 2017.

Sara is the ballsy political heir of President Rodrigo Duterte who gained national attention in 2011 when she punched a court sheriff who was trying to implement a demolition order covering an urban settlement in Davao City.

She was believed to have initally opposed her father’s presidential run but later pulled a stunt – she shaved her head – to call for support.

She stayed in the public eye defending her father from his critics. Her husband, lawyer Manases Carpio, was accused last year of being involved in the so-called Davao Group’s smuggling activities. Bato, Tulfo, and Bistek among old-timers

The November Laylo survey also puts Police chief Director General Ronald “Bato” dela Rosa in the Magic 12. He did not perform as well in the December SWS survey but was still within the Top 20.

Other than Cayetano, the other returning senators are Lito Lapid and Jinggoy Estrada, who was granted bail in September 2017 after spending more than 3 years in detention for plunder charges over the pork barrel scam.

Former senator Ferdinand Marcos Jr made it to the Magic 12 in the December 2017 SWS survey but his name didn’t appear in the November Laylo survey. His sister and Ilocos Norte Governor Imee Marcos ranked 22-23.

Former senators Manuel Roxas II and Serge Osmeña were also among the Top 20 in the SWS poll.

Only one Estrada in the Senate?

The 2019 senatorial survey shows both sons of former President Joseph Estrada – Jinggoy and Joseph Victor (JV) – making it to the Magic 12.

But JV, in an interview on ABS-CBN News Channel on Wednesday, said he thinks only one Estrada should run in the next election.

“Only one should run. I don’t know how these things will be resolved. But these are challenges. I will still stick to my principle that only one has to run…Probably the decision of my father would matter. But personally I would want to continue,” he said.

Jinggoy, however, performed better in the survey conducted by SWS.

Estrada was the screen name of the former president. JV Ejercito officially added it to his name in the 2010 senatorial elections after surveys showed that he performed better with it. – with reports from Camille Elemia/Rappler.com