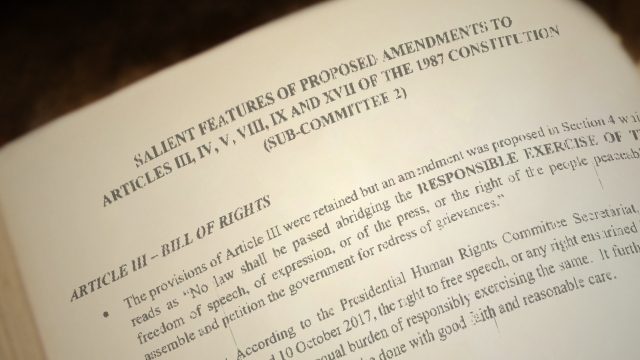 MANILA, Philippines – Citing alleged abuses in the exercise of free speech in the Philippines, a House sub-committee that reviewed and proposed amendments to Article III of the 1987 Constitution wants protection limited to “responsible exercise of the freedom of speech.”

The proposed amendment was presented on Tuesday, January 16, as the House committee on constitutional amendments began deliberations on the proposals of 4 sub-committees that were tasked to review the Constitution.

During a presentation before the committee, Capiz 2nd District Representative Fredenil Castro, the vice chairperson, said they are proposing to insert the phrase “responsible exercise of the” to Section 4 in the Bill of Rights.

It will then now read: “No law shall be passed abridging the RESPONSIBLE EXERCISE OF THE freedom of speech, of expression, or of the press, or the right of the people peaceably to assemble and petition the government for redress of grievances.”

“According to the Presidential Human Right Committee Secretariat, in their position paper dated 10 October 2017, the right to free speech, or any right enshrined in the Bill of Rights, comes with the equal burden of responsibility exercising the same. It further said that the exercise of one’s rights must be done in good faith and reasonable care,” read the sub-committee’s report.

The committee will consolidate and deliberate on these proposals. The consolidated version will eventually also be presented before the Constituent Assembly once it convenes to study and make amendments to the Constitution.

The House opposition bloc did not agree with this proposal.

“How can you define responsible? What is responsible for them? So when you say responsible, it’s what favors them?” said Magdalo Representative Gary Alejano, citing the proliferation of disinformation and propaganda from online personalities who are apparent supporters of President Rodrigo Duterte.

Supporters of Duterte have been accused of peddling false information as propaganda through their social media accounts. Several of these supporters, including online personality Mocha Uson, have since been appointed to key posts in government.

Ifugao Representative Teddy Baguilat said this provision could be used to curtail freedom of expression.

“That’s why, what happened to Rappler, that’s because they feel it’s not a ‘responsible’ media institution. And I’m sure other media institutions are threatened right now. So that’s the thing, who defines?” he said.

Baguilat was referring to the Securities and Exchange Commission (SEC) decision to revoke Rappler’s registration for allegedly violating the Constitution and the country’s anti-dummy laws for getting foreign investments through Philippine Depositary Receipts or PDRs – legal instruments that do not make the investors owners of the company. (READ: Of PDRs and ‘foreign ownership’ of PH media)

Rappler has decried harassment from government. No less than President Rodrigo Duterte himself has questioned Rappler’s ownership. The company has long debunked the allegation. – Rappler.com