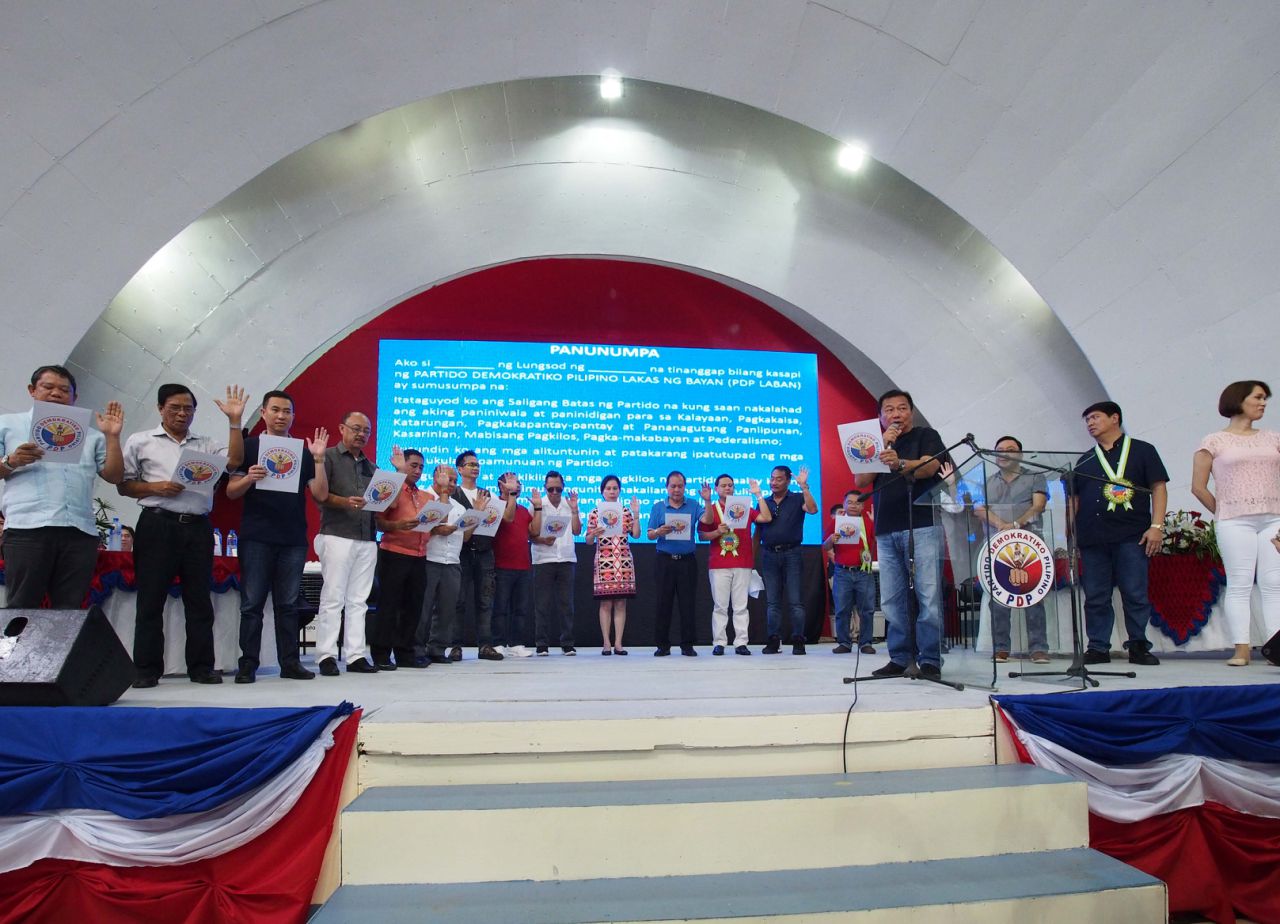 MANILA, Philippines (UPDATED) – Speaker Pantaleon Alvarez is sticking to his belief that failure to align with the ruling party’s decisions should – and will – lead to the depletion of budgets.

Alvarez on Thursday, January 18, threatened to give “zero budget” to the provinces of leaders and politicians who refuse to support the proposed shift to a federal form of government. He made the assertion during the oath-taking of PDP-Laban members in Iloilo City.

(Of course, provinces that refuse to cooperate, will get zero budget. I don’t want it too, right? It couldn’t be that you’re with us, then their leaders don’t want to join us. Should there be equal treatment?)

(I won’t force you. If you don’t want to join us, okay. I’ll respect that because it’s your right, but like I said, you should also respect my right to give you zero budgets, right?)

Alvarez, who represents the 1st District of Davao del Norte, cited a concrete, fresh example to show that he meant it.

(We all have our respective rights. But what would my allies say? Oh, it’s the same if I join you or join the opposition. That wouldn’t be fair, right? So we understand each other, right?)

Alvarez was referring to the controversial decision to slash the district budgets of House members – both from independent blocs and the supermajority – who have been voices of opposition in the House.

The PDP-Laban Secretary General defended that controversial move, saying cutting an opposition lawmaker’s budget was the “essence of democracy.”

Alvarez devoted much of his speech detailing the advantages of a federal form of government. He said it would solve the perennial problem of limited opportunities in the countryside compared to Metro Manila.

Under federalism, a province or a region would be able to retain the bulk of its earnings. A small percentage would be send to the national government instead. (READ: Will federalism address PH woes? Pros and cons of making the shift)

In his speech, Alvarez urged Ilonggos to support the initiative, and noted that only Duterte has favored decentralizing power in the Philippines in recent history. (LOOK BACK: Past Charter change attempts and why they failed)

(The President doesn’t care about money. He doesn’t care if the President ends up handling less money. What’s important is that hope and opportunity is given to the provinces and regions of the Philippines.)

After his threat of zero budget, Alvarez assured Ilonggos that they would not suffer that fate since their leaders were aligned with the majority.

Those opposed to a shift to federalism have argued that Charter change, which can open up avenues for abuse under a Congress dominated by administration allies, is not the answer to fueling progress outside Metro Manila, and have recommended a stronger push for decentralization, instead.

In the Senate, minority Senator Risa Hontiveros slammed the Speaker’s zero-budget threat, arguing that it is an attempt to establish “pweradalism” – a word play of federalism which implies non-participation of opposing sectors – as long as they pass the measure.

“I have my doubts on the capacity of this administration to carry out an inclusive, democratic process for charter change. Ngayon pa lang (As early as now), we are force-fed their brand of federalism that raises a lot of problematic issues, and do not seem to value people-led and participatory fiscal processes,” Hontiveros said.

“It is very clear that the agenda of amendment, through a con-ass, is to facilitate the transition to Duterte’s ‘pweradalism’, which will impact greatly on term limits and the composition of the legislature including the present legislature. I urge the people to oppose this move. Hindi pupuwede na ietsa-pwera ng gobyernong ito ang tinig at boses ng mamamayan. (The government should not exclude the voice of its citizens,)” she added.

Others also feared that charter change would lead to another dictatorship similar to that of the late strongman Ferdinand Marcos.