In a press conference on Monday, January 29, Marcos showed several ballot images from 12 towns in Camarines Sur and Negros Oriental which he said had “questionable” marks that supposedly indicate electoral fraud.

A reporter asked Marcos, “Are you accusing Comelec and Smartmatic of cheating and being in cahoots with the Robredo camp?”

“Yes,” replied Marcos. “The evidence will be the final count in the recount as opposed to the reported count of Comelec and Smartmatic.”

Marcos, who filed an electoral protest against Robredo, sounded the alarm on the presence of squares enclosing the voters’ shaded marks on the ballot images.

He said the square marks are “immediately a violation” of jurisprudence mandating that ballot images “should be an authentic and true representation of the actual ballot.”

Marcos then flashed a sample ballot image from San Nicolas, Iriga City in Camarines Sur, where the voter shaded both circles beside the names of Robredo and Senator Antonio Trillanes IV for vice president.

Only Robredo’s name was enclosed with a square. The vote summary for this ballot showed a valid vote for her. Marcos contested this, saying the machine should have voided the vote for vice president. 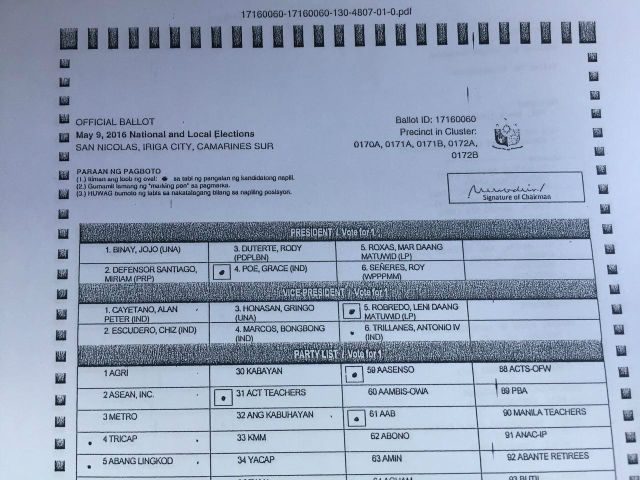 The defeated vice presidential bet also showed another sample ballot image from Jilocon, San Jose in Negros Oriental, where the voter only shaded the slot beside his name for vice president.

The vote-counting machine (VCM), however, counted it as an undervote. Marcos’ lawyer and spokesperson Vic Rodriguez said the alleged cheating was “specific” for his client only.

“It was Marcos-specific, and it was done, the cheating was carried out with such a surgical precision targeting only the votes for Senator Marcos,” said Rodriguez.

Marcos had previously accused the Comelec and Smartmatic of a “security breach” over the hash code controversy during the polls.

The Manila City Prosecutor’s Office junked Marcos’ complaint in November 2016, but the Department of Justice later reversed this and ordered the filing of criminal charges against the Comelec and Smartmatic in June 2017.

According to Marcos, the alleged poll fraud that manifested through the ballot images was supposedly done in the 8 Regional Configuration and Deployment Hubs that the Comelec created through Resolution No. 10114 on May 3, 2016.

These hubs aimed to “immediately cater to incidents of sets of SD cards needing to be replaced,” reads the Comelec resolution.

But for Marcos, these hubs were the sites of election cheating.

“I think they did it (cheating) by the secret creation of the 8 regional hubs, the 8 mini Comelecs that nobody knew about – not the public, not the candidates, not the party, nobody. Nobody knew about it except Comelec and Smartmatic,” said Marcos.

His camp, however, has not yet consulted the Comelec on the specifications of voters’ shaded marks that a VCM recognizes as a vote or an undervote. (READ:  Undervoting in 2016 VP election: Will it help Marcos’ case?)

Rodriguez also said that even if their conclusion on Monday was only based on the ballot images of 12 towns, it already disproves Robredo’s claim of an honest victory.

Marcos had chosen 3 pilot provinces – Camarines Sur, Negros Oriental, and Iloilo –where the initial recount of ballots will be held starting next month.

The PET ruled that the merit of the rest of his electoral protest against the Vice President will rest on the results of this recount.

Ballots from Camarines Sur were retrieved last week and are being delivered by the PET Retrieval Team to the SC-Court of Appeals Gymnasium in Ermita, Manila. – Rappler.com