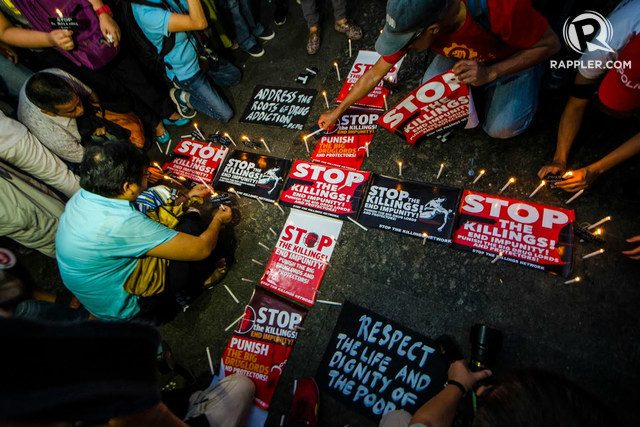 In a statement on Thursday, February 1, the New York-based human rights organization said an independent probe could look into the disparity between government numbers and tallies by watchdog groups.

“The glaring disparity between the Philippine government’s official death toll and those of credible independent observers underscores the urgent need for a UN-led independent investigation into killings since the drug war began in June 2016,” said Phelim Kine, HRW’s deputy Asia director.

Data from the government show that at least 3,987 individuals have been killed in police’s anti-drug operations. The number of those killed vigilante-style is still highly contested – with groups such as the Philippine Alliance of Human Rights Advocates (PAHRA) estimating the figure could be more than 12,000.

In August 2017, the Commission on Human Rights (CHR) said it believes that the number of fatalities in Duterte’s drug war has exceeded the number being peddled by the state. (READ: CHR: Death toll in drug war higher than what gov’t suggests)

Pushing for an “impartial and verifiable death toll,” according to Kine, is a crucial first step in attaining justice and ensuring that those responsible will be prosecuted.

But if the government does not seek assistance from the UN, it could otherwise be subjected to investigation by the UN Human Rights Council.

“Ultimately, those responsible for drug war murders will be brought to justice,” Kine said. “The question for Philippine officials is whether they want to be assisting the prosecutor or facing one.” – Rappler.com