Kids’ vaccination rate down to 60% after Dengvaxia scare – DOH 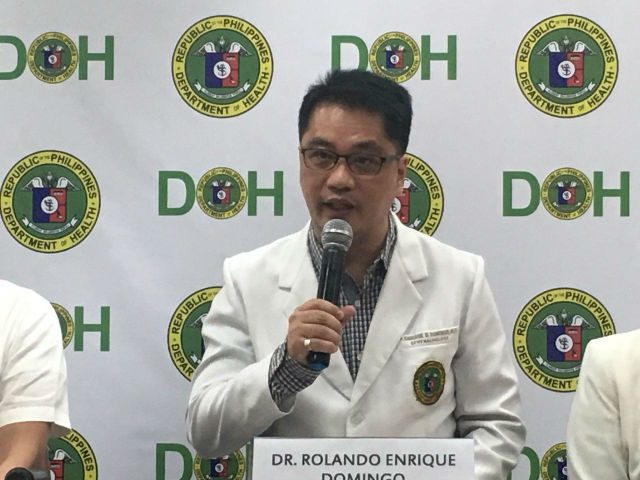 MANILA, Philippines – The Department of Health (DOH) is alarmed as more and more parents are refusing to avail of the government’s various vaccination programs following the Dengvaxia mess.

Health Undersecretary Enrique Domingo said on Friday, February 2, that only about 60% of Filipino children are getting their scheduled vaccines, when the DOH’s annual vaccination rate target is around 85%.

“I think we are down to 60% coverage, kasi dati gusto natin diyan mga 85% (because we usually want the figure at 85%). I don’t know exactly the exact figures but siguro (maybe) by the end of the year, we’ll get a more exact figure. But the local experience right now is the uptake of our vaccination programs is really going down,” Domingo in a press conference on Friday.

The health official made the statement on the same day that the DOH and the experts panel from the University of the Philippines-Philippine General Hospital bared the results of the analysis of 14 cases of children who died after getting vaccinated with Sanofi Pasteur’s Dengvaxia dengue vaccine.

Three vaccinated children developed and died of dengue, 9 died due to various diseases they got after their vaccination, while the cause of death of the last two cases remain unknown.

Domingo explained that parents have become so scared after Sanofi announced Dengvaxia may lead a person to develop severe dengue if he or she had not been infected by the virus prior to immunization. (READ: TIMELINE: Dengue immunization program for public school students)

The parents are now refusing to avail of free government vaccines that could prevent their kids from getting other preventable diseases like polio and measles.

Domingo said this explains the recent measles outbreak in Davao. He added parents are even avoiding deworming initiatives from the DOH.

(This is because we have countless other vaccines that can protect your child from polio, diphtheria, measles, and tetanus. They are tried and tested, and it is vital that your children get them.)

Health Secretary Francisco Duque III made the same appeal to parents as soon as he suspended the dengue vaccination program in December 2017.

A group of top doctors, among them former health chiefs Esperanza Cabral and Manuel Dayrit, recently said the “unsubstantiated” claims being made against Dengvaxia and DOH officials are causing parents to slowly lose faith in government health programs.

In the next 5 years, DOH will closely monitor the health of some 837,000 children who were vaccinated through the school-based immunization program launched by ex-health chief Janette Garin in April 2016. – Rappler.com