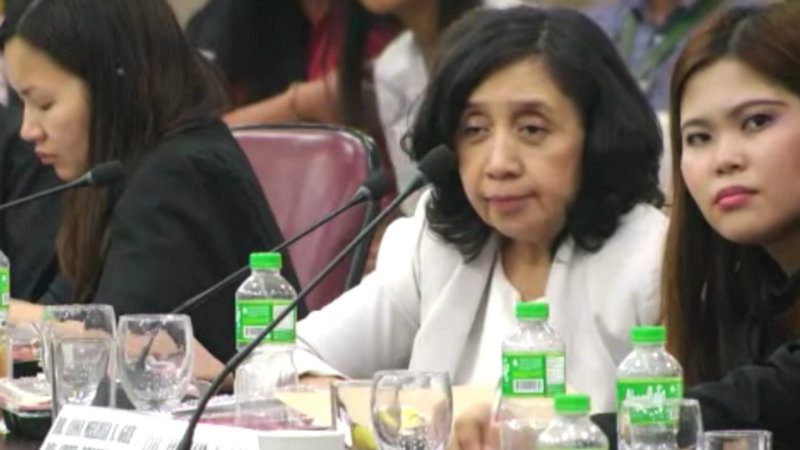 MANILA, Philippines – A Filipino expert who belongs to one of the Philippine health department’s research arms admitted on Monday, February 5, that she received P40,000 a month for clinical trials on Sanofi Pasteur’s dengue vaccine.

Ma. Rosario Capeding, listed as among the Research Institute for Tropical Medicine (RITM)’s experts, headed clinical trials for the vaccine.

Nueva Ecija 1st District Estrellita Suansing questioned Capeding’s involvement in the study, which the Food and Drug Administration (FDA) later cited as the basis for its approval of Sanofi’s Dengvaxia vaccine.

Capeding, citing an “executive order” which she did not specify, said personnel from the research arms of the Department of Health may be permitted to conduct studies funded by private parties, such as pharmaceuticals.

Lawmakers questioned this practice, however, pointing out the obvious conflict of interest in doing a study for a pharmaceutical that needs the Philippine government’s vetting.

In the case of Dengvaxia, the Philippine government during the Aquino administration purchased over P3 billion worth of vials from Sanofi. (TIMELINE: Dengue immunization program for public school students)

(The FDA used your report to approve the registration of the product. And it’s Sanofi which commissioned you. Of course, because they paid you, don’t tell me you won’t come up with a positive report? It’s hard to imagine that you would come up with a negative result.)

Capeding is an expert in the field of pediatrics. She is Medical Specialist IV and head of the Microbiology Department and Dengue Study Group of the RITM and is a fellow and diplomate of both the Philippine Pediatric Society and the Pediatric Infectious Disease Society of the Philippines.

Capeding was also awarded the 23rd Dr Jose P. Rizal Memorial Award for Research in 2014 by the Philippine Medical Association. She is a member of the advisory board of the Prevention for Dengue Control (Global).

Asked by Suansing outright if her participation in the study wasn’t a conflict of interest, Capeding cited the “executive order.”

“Ikaw nga ang basis ng FDA to approve the product registration. So sino ang basis ng FDA? Ikaw. What are you saying now? Sinasabi mo na, ‘Wala akong kinalaman diyan,’” said Suansing, who noted that, in her district, parents whose children were vaccinated regularly came to her in tears.

(You were the basis for the FDA’s approval of product registration. So on whose findings did FDA based [its decision]? Yours. What are you saying now? You’re saying, “I have nothing to do with that.”)

Legislators also criticized the FDA for issuing the certificate for product registration for Dengvaxia even if the vaccine had not gotten approval from the European Medicines Agency (EMA), a European Union agency responsible for evaluating medical products.

The RITM’s trials ended as late as November 2017, or the same month Sanofi issued a warning against its own product. A 6-year-long study revealed that it posed danger toward persons who had never gotten the virus prior to vaccination.

Health Secretary Francisco Duque III earlier opined that his predecessors should have waited for the end of clinical trials of the vaccine before implementing the mass vaccination program.

It turns out, the RITM study headed by Capeding was not yet done by the time the program was rolled out in public schools in Metro Manila, Central Luzon, and Calabarzon.

The basis for the FDA’s approval for the vaccine’s registration was a 2011-2014 trial on Dengvaxia’s efficacy. It was only in November 2017 that Sanofi discovered the vaccine’s risk.

Since Sanofi’s disclosure of the latest studies on Dengvaxia, Duque stopped the program.

The Philippine government has since demanded for a refund for the unused vials of Dengvaxia, which Sanofi agreed to. The giant pharmaceutical, however, rejected a demand for a refund of the cost of the used vials as well.