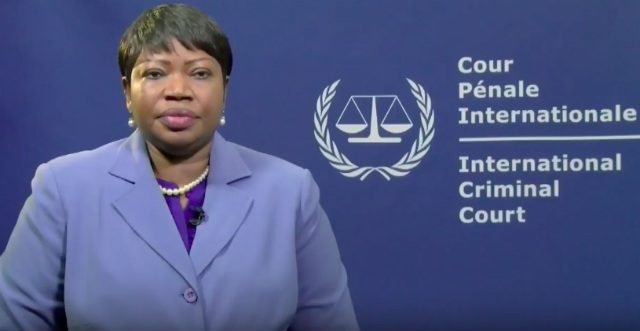 MANILA, Philippines – The Office of the Prosecutor of the International Criminal Court (ICC) confirmed it is starting a “preliminary examination” into the high number of killings under President Rodrigo Duterte’s violent war on drugs – after “closely following the situation” starting in 2016.

ICC Prosecutor Fatou Bensouda said that her office has decided to pursue a preliminary examination of the situation in the Philippines “following a careful, independent, and impartial review of communications and reports documenting alleged crimes.”

“The preliminary exam in the Philippines will analyze crimes allegedly committed in the state party since at least July 2016 in the context of the war on drugs campaign launched by the government of the Philippines,” she said in a video statement on Thursday, February 8.

“While some such killings have reportedly occurred in the context of clashes between and within gangs, it is alleged that many of the reported incidents involved extrajudicial killings in the course of police anti-drug operations,” Bensouda added.

Malacañang earlier announced that the Philippine government has been informed of this latest move, adding that Duterte “welcomes the preliminary examination because he is sick and tired of being accused.”

The ICC is the world’s first treaty-based permanent international criminal court that aims to end impunity. It investigates serious crimes including genocide, crimes against humanity, war crimes, and crimes of aggression.

The ICC’s Office of the Prosecutor is acting on two communications filed by Filipino lawyer Jude Sabio, Senator Antonio Trillanes IV, and Magdalo Representative Gary Alejano in 2017, urging the court to “commit” Duterte and his senior officials to a trial while highlighting his various pronouncements regarding the killings of criminals, specifically suspected drug personalities.

Data from the government show that at least 3,987 individuals have been killed in anti-drug operations of the police. The number of those killed vigilante-style is still highly contested – with groups such as the Philippine Alliance of Human Rights Advocates (PAHRA) estimating the figure could be more than 12,000. (READ: The Impunity Series)

The preliminary examination is the first step in the ICC’s process.

Bensouda emphasized that a “preliminary examination is not an investigation but a process of examining the information available to reach a fully informed determination on whether there is reasonable basis to proceed investigation pursuant to criteria established by the Rome Statute.”

The Office of the Prosecutor will conduct a preliminary examination to establish whether there are “genuine national proceedings” being conducted under the Philippine justice system. Due to complementarity, the ICC can only investigate if it sees that the Philippines does not or is “unwilling or unable to do so genuinely.” (READ: What challenges will complaint vs Duterte face before ICC?)

In doing so, Bensouda said that her office will closely coordinate with Philippine authorities “with the view to discussing and assessing any relevant investigation and prosecution at the national level.”

There is also no specific timeline as to the length of the examination, adding that she will consider jurisdiction, admissibility, and the interest of justice in deciding whether to pursue an investigation.

“I reiterate that my office undertakes this work with full independence and impartiality in accordance with its mandate and the applicable legal instruments of the court,” she said. “As we do, we hope to count on the full engagement of relevant national authorities in the Philippines.”

Presidential Spokesperson Harry Roque, during the announcement early Thursday, said that if the complaint prospers, Duterte would be willing to face the ICC.

“If need be, he will argue his case personally and face the ICC,” Roque said, but later added that if this happened, Duterte would put the prosecutor on the stand and ask what prompted proceeding with the case.

Trillanes and Sabio, meanwhile, welcomed the opening of a preliminary examination.

The Commission on Human Rights, for its part, said that “if requested”, it is ready to assist in the preliminary examination process as the government is duty-bound to fully cooperate with the ICC. – Rappler.com