Duterte lashes out at Kuwait over mistreatment of Filipino workers 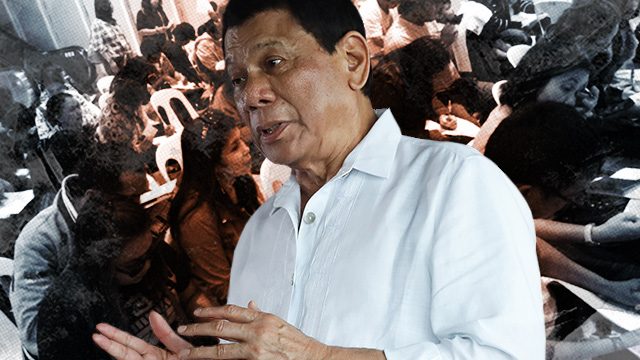 DAVAO CITY, Philippines (UPDATED) – President Rodrigo Duterte vowed that the ban of deploying Filipino workers to Kuwait will continue as the country probes the recent discovery of a Filipina’s body in a freezer in the Arab nation.

“If a ban is what is needed, then let it be so,” Duterte told a press conference in his hometown Davao City on Friday, February 9.

In a speech in his hometown on Friday, February 9, Duterte lashed out at Kuwait, which he said has seen at least 82 deaths of Overseas Filipino Workers (OFW) in 2016 alone.

Philippine authorities recently learned domestic worker Joanna Daniella Demafelis’ body was found in a freezer in Kuwait. Her body is believed to have been stored for more than a year.

The worker’s employers, Lebanese Nader Assaf and his Syrian wife, were implicated.

Following this, Duterte met Saleh Ahmad Althwaikh, Kuwait Ambassador in Manila, at the Palace. He also announced he would be departing for Kuwait to speak with leaders in the Middle East country.

“This is a national shame,” he said.

Senator Joel Villanueva, chair of the  Senate committee on labor, employment, and human resources development, meanwhile “strongly condemns” the killing of Demafelis in a statement.

“We are outraged by this latest horrible crime against our overseas Filipino workers. We should stop sending our kababayans to countries where they are not being treated properly,” the senator stressed.

Villanueva also supported Duterte’s ban on OFW deployments to Kuwait, adding, “Our primary concern should be the lives and safety of our workers. We should not wait for another OFW to die for us to act on this.”

Meanwhile, Labor Secretary Silvestre Bello III affirmed that his agency will discontinue processing applications of Filipinos bound to work to Kuwait until the country determines what caused the death of Demafelis, including other OFWs reported dead last year.

“In addition, I also suggest to our President in order to lift the suspension, the Kuwait government should already sign the memorandum of understanding (MOU) that has been pending with them for the last three years,” he said.

Bello was referring to an MOU that provides additional protection for OFWs in Kuwait. – Rappler.com