Duterte: ‘I will close Boracay’ 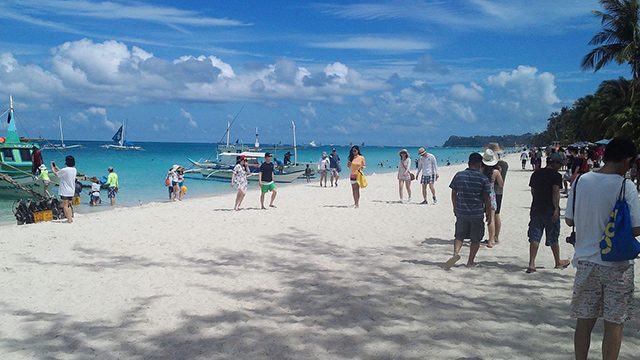 Facebook Twitter Copy URL
Copied
President Rodrigo Duterte has given Environment Secretary Roy Cimatu 6 months to address the environmental woes of Boracay, which he describes as a 'cesspool'

MANILA, Philippines – President Rodrigo Duterte said he wants to “close” popular beach island Boracay if its environmental problems are not resolved in 6 months.

“I will close Boracay. Boracay is a cesspool,” Duterte said on Friday night, February 9, during the Manila Times Business Forum in Davao City.

Duterte said the sewerage problem in the top tourist destination is wreaking havoc on the island’s ecosystem.

“You go into the water, it’s smelly. Smell of what? Shit. Because everything that goes out in Boracay…it’s destroying the environment or the Republic of the Philippines and creating a disaster coming,” he said in a mix of English and Filipino.

The President predicted that eventually, Boracay – one of the world’s best island destinations – will cease to attract tourists.

“There will be a time that no more foreigner will go there because he will have – when he goes back to the plane to where he belongs – he will be full of shit going back and forth to the restroom,” said Duterte.

The Philippine Information Agency earlier reported that based on data from the Aklan Provincial Tourism Office, there were 1,669,751 tourist arrivals in Boracay from January to October 2017, 14% higher than in the previous year.

Local authorities have been long grappling with the problems related to Boracay’s popularity as a top beach destination.

In 2015, the Department of Environment and Natural Resources had warned it would shut down establishments that fail to comply with sanitation standards, citing Boracay’s deteriorating water quality.

The island has been attracting tourists with its fine white sand and azure waters, but has evolved into a “party island” teeming with commercial establishments. (READ: Boracay: Paradise lost?) – Rappler.com