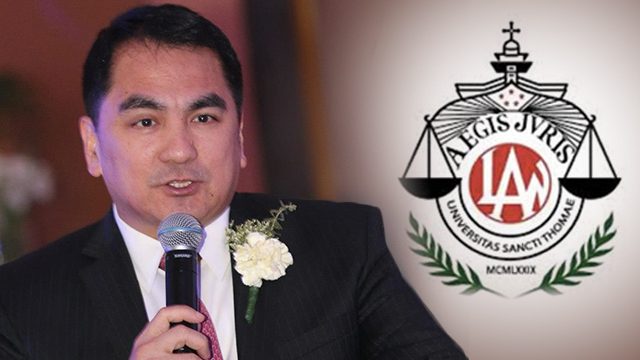 MANILA, Philippines (UPDATED) – University of Santo Tomas Law Dean Nilo Divina and 20 other lawyer-alumni members of the Aegis Juris Fraternity are now facing Supreme Court investigation for disbarment for their alleged “cover up” of the fatal hazing of 22-year-old Horacio “Atio” Castillo III.

Senator Juan Miguel Zubiri, a family friend of the Castillos, announced this during the plenary session on Tuesday, February 13.

“This is a great day of justice. We received, through the office of Senator Lacson, a notice from the Supreme Court that those mentioned in the possible cover up of the Atio Castillo hazing case, that were mentioned repeatedly in FB (Facebook) posts and social media are now undergoing investigation by the Supreme Court on disbarment,” Zubiri said.

The panel earlier recommended the disbarment of lawyers, who are alumni of the University of Santo Tomas-based Aegis Juris Fraternity. Some of them were involved in a Facebook group chat on the day Castillo died, which senators saw as a tool for planning the supposed cover up. (READ: What’s inside the Aegis Juris alumni chat box when Atio was killed)

“I’d like to congratulate the SC for their swift action. As soon as they received the committee report, they took cognizance and immediately approved the resolution for the investigation on the disbarment of these individuals,” the senator said.

The Castillo family were reportedly informed of the new development.

Aside from Divina, the following lawyers are also subjects of complaint, according to the SC notice sent to the Senate:

In response, Divina said he welcomed the chance to answer the allegations. He also lamented as “unfair and unjust” how his name had been dragged into the controversy.

“I welcome the opportunity to respond to the points raised in the report. I have always maintained that I did not do anything illegal or unethical,” Divina said.

“It is unfair and unjust to be dragged into this considering that by the evidence of the Senate I had no prior knowledge of the incident, was not a party to any cover up or even mentioned in the group chat,” he added.  – Rappler.com