Weeping mothers say their kids got Dengvaxia without consent 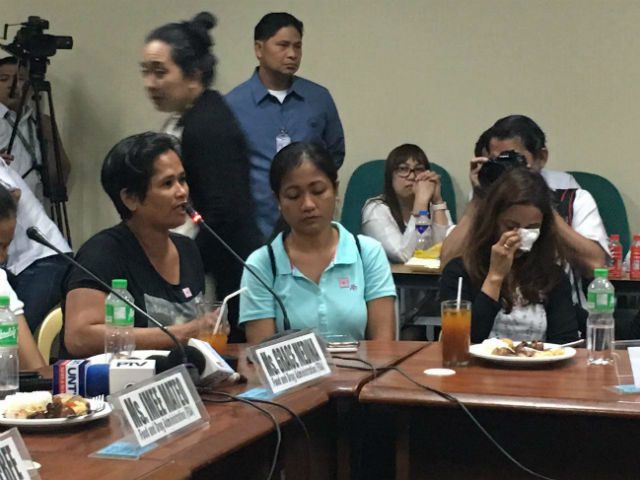 MANILA, Philippine – Mothers invited to the 6th Senate hearing on the Dengvaxia controversy tearfully told senators their late children were given the vaccine without their consent.

Janet Elipane and Annalyn Ebunia were among the mothers whom Senator Richard Gordon listened to as the Senate blue ribbon committee and panels on finance and health resumed their probe on Wednesday, February 21.

Ebunia, who hails from Muntinlupa City, said her child Mark was given the vaccine in school through the DOH’s now-suspended dengue vaccination program without her consent.

She only found out about the vaccination when Mark’s classmates told her it about it after the his death on January 30 this year.

(He was a victim of the dengue vaccine. Have mercy! We want justice.)

According to Ebunia, her child started getting on and off fever starting the morning of January 29. At 7 pm, Mark’s stool already had blood. He died around 24 hours later according to his mother.

(My son already had fever. Before implementing something like this, you should have asked permission from the parents because those children have parents. It’s painful for parents to lose their children, like mine!)

(They gave the vaccine the 2nd time without telling me. My child was sick for 3 days with a headache. When my child went home from school, my child was dizzy and nauseuous.)

Her child started vomting the next day, prompting Elipane to bring the kid to the hospital. Eleven days later, Elipane’s child passed away.

The mother, however, also told senators and Department of Health (DOH) officials in the room that a lump was discovered inside her child’s head. It was never removed.

A signed parent’s consent form was needed before the health workers could administer the vaccine to public school students in the National Capital Region, Central Luzon, and Calabarzon.

Current Health Secretary Francisco Duque III asked the mothers to give their children’s clinical records to the DOH. He and members of his staff personally approached all the parents present at the hearing and listened to their concerns. (WATCH: Duque talks to parents of kids vaccinated with Dengvaxia)

The department has tapped experts from the University of the Philippines-Philippine General Hospital to review cases of dead vaccinees and determine whether or not Dengvaxia influenced their deaths.

So far, the UP-PGH panel has not found evidence directly linking Dengvaxia to the deaths. Three out of the 14 cases died of dengue despite getting the shot. The rest died due to other diseases they just happened to develop after vaccination.

Less than two years later, Sanofi said its vaccine may cause a person to develop severe dengue if he or she had not been infected by the virus prior immunization.

He clarified, however, that most vaccines are only 60% effective in battling the disease they are designed to prevent. There is still about a 40% chance for a vaccinated person to develop the disease.

Wednesday’s hearing was attended by Garin, her successor Paulyn Ubial, and Duque. Gordon told the 3 DOH chiefs the department is “liable” for implementing the vaccination program.

Gordon also grilled Garin for appointing herself as Food and Drug Administration director-general 6 months before the agency gave Sanofi the go-signal to sell Dengvaxia in the Philippines.

For now, the DOH is on a heightened surveillance of the health of all the vaccinees. Duque vowed to parents that their medical expenses will be shouldered by the government should their child be vaccinated with Dengvaxia.

With the scare brought about Dengvaxia, Duque is also focused on convincing Filipino parents to continue availing other vaccination programs for their children.

The DOH is set to  file a civil suit against Sanofi for refusing to comply with the government’s demand for a full refund over the purcahsed Dengvaxia vials. – Rappler.com