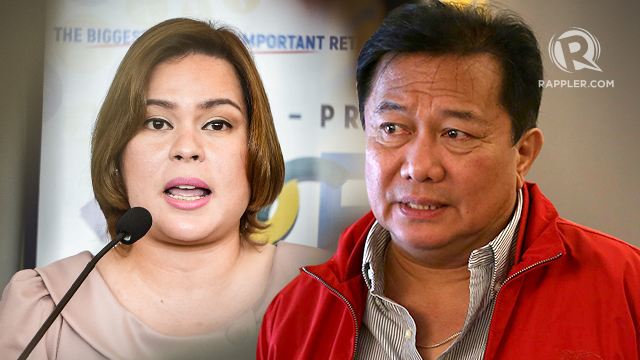 MANILA, Philippines – Davao City Mayor Sara Duterte-Carpio did not mince words when she lashed out at Speaker Pantaleon Alvarez for supposedly tagging her as a member of the opposition.

“The Philippines will be a better country if he is not Speaker. PRD (President Rodrigo Duterte) will be a stronger president without Alvarez,” Duterte-Carpio told Rappler on Thursday, February 22.

She called her father’s key ally in Congress an “insecure slob” and a “fat sleaze,” as she accused him of telling mayors in Mindanao “that I am opposition.”

Duterte-Carpio also did not appreciate Alvarez supposedly telling media that she and her father were feuding and that she formed her regional political party, Hugpong ng Pagbabago (HNP), without his blessing.

“This insecure fat sleaze is the epitome of the idiom barking at the wrong tree,” Duterte-Carpio said in a message to Rappler.

The Davao City mayor took to Instagram and Facebook on Thursday to vent her ire on Alvarez, whom she described as an “asshole.”

“Kung asshole ka sa (If you’re an asshole in) Congress, don’t bring that to Davao, leave it in Manila. Somebody should tell the President what you are doing. How dare you call me part of the opposition? Kapal ng mukha mo (You’re so thick-faced). You messed with the wrong girl,” she said in one Facebook post.

In another Facebook post on the same day, she said: “Ang sabi mo in a crowd, ‘President iba siya, Speaker ako (You told the crowd, ‘He’s the President, I’m the Speaker), I can always impeach him!’ And you call me opposition? Somebody should tell the President about the truth. Antay ka bukas (Just wait tomorrow), I have another story…”

Alvarez denied making such remarks. “Hindi ko po sinabi ‘yun at hindi ko po maaring sabihin ‘yun (I didn’t say that and I cannot say that),” he said in a statement.

In her message to Rappler, Duterte-Carpio suggested that House members unseat Alvarez.

“I do not understand why members of the House of Representatives do not tell the President what the fat ass is up to and just coup d’état the Speakership,” she said.

“He is not a leader. He will never be a leader. Many congressmen can do more [than] what he is delivering for the President,” the mayor added.

She said those who are loyal to Duterte should be suspicious of Alvarez, secretary-general of the ruling PDP-Laban.

“We all support PRD, Alvarez just loves himself. Nagkamali si Alvarez, akala niya kasi (Alvarez is mistaken, he thinks) the world is about him,” said the presidential daughter.

Duterte-Carpio said in a statement that HNP, to be launched on Friday, February 23, has the blessing of her father.

“I would like everyone to know, including the Speaker of the House, that the unity I forged with the 4 governors of Region XI has the blessings of President Rodrigo Duterte. Even the use of the word Hugpong as the name of our regional party Hugpong ng Pagbabago has the President’s approval,” said the HNP chairperson.

The lawmaker was expelled from PDP-Laban in October last year, after he was accused of “disloyalty” to the party and its leaders, and organizing and participating in an unathorized and unsanctioned party convention, the National Gathering of Regional Presidents in Davao City.

Prior to his expulsion, Floirendo got into a very public word war with Alvarez reportedly sparked by a spat between their girlfriends. Alvarez later filed a graft complaint against Floirendo over the alleged anomalous deal between the government and Floirendo’s company, the Tagum Agricultural Development Company (Tadeco). On Wednesday, February 21, the Sandiganbayan issued an arrest warrant against Floirendo, who posted bail the same day.

The tension within the President’s circle of allies had been simmering since last year, when around 200 PDP-Laban members from the Mindanao bloc defected from the ruling party and said they would declare themselves independent from the PDP-Laban national council.

This was followed by Alvarez’s declaration as “persona non grata” in Tagum City. – with a report from Bea Cupin / Rappler.com