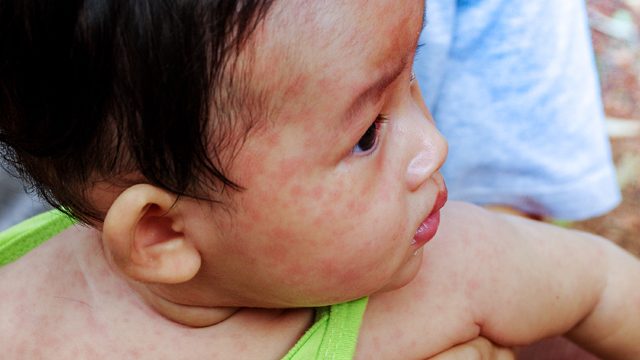 MANILA, Philippines (UPDATED) – The Department of Health (DOH) declared a measles outbreak in a barangay in Taguig City on Thursday, March 1.

How many are affected: Health Undersecretary Enrique Domingo told Rappler that the barangay, which he did not name, recorded 7 cases of kids getting measles in the past weeks.

“We have a response team to investigate and work to stop transmission of the disease,” said Domingo.

But he assured the public that the 7 children are “fine.”

Why it is considered an outbreak: Seven cases may be few, but Domingo said they still declared an outbreak because the disease is supposed to be preventable through the measles vaccine.

“Measles is a vaccine-preventable disease and we should have zero cases. So even if we have just one to two cases, it is considered an outbreak and transmission must be controlled,” explained Domingo.

Before that, a measles outbreak had also been declared in Zamboanga City, Davao Region, and Davao City.

Why it matters: Parents are now refusing to avail of government health programs, including free vaccination, for their children following the panic brought about by the controversial Dengvaxia dengue vaccine.

Dengvaxia was used in the now-suspended dengue immunization program, which was launched in 3 regions in April 2016.

Less than two years later, French pharmaceutical giant Sanofi Pasteur announced Dengvaxia may lead a person to develop severe dengue if he or she had not been infected by the virus before vaccination.

Duque already ordered health workers to “woo” parents to continue having their kids vaccinated for other diseases. (FAST FACTS: What is measles, and how can it be prevented?)

Why parents are scared: Parents have begun reporting that some of the vaccinated children died after getting a shot of Dengvaxia.

This prompted the DOH to ask experts from the University of the Philippines-Philippine General Hospital (UP-PGH) to study clinical records of the children to determine if Dengvaxia caused their deaths.

No clear evidence of that has been established yet. The UP-PGH experts, however, said 3 out of the 14 cases they studied so far died of dengue despite getting the vaccine.

But their findings have been questioned by both public health experts and lawmakers, who said the hysteria being caused by PAO’s probe is making parents lose confidence in DOH programs. – Rappler.com