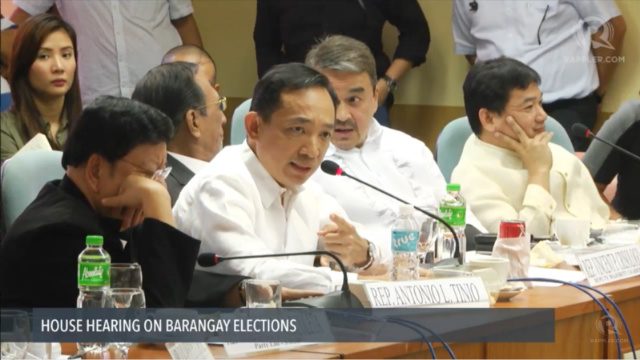 MANILA, Philippines – Tensions flared at the House of Representatives as its suffrage committee rushed Monday, March 12, to approve postponing the village elections for the 3rd time – a move slammed by watchdogs as a blow on democracy.

The House suffrage committee voted overwhelmingly to move the barangay and Sangguniang Kabataan (SK) elections to October 8 from the original May 14 this year.

Packed with President Rodrigo Duterte’s allies, the House is set to tackle this proposal at the plenary, even as there is no counterpart bill at the Senate.

Four House bills seek to postpone the barangay and SK elections again. Two of these bills mention the need for the Commission on Elections (Comelec) to better prepare for the polls, while the two others cite preparations for a plebiscite for a new charter, which is Duterte’s priority.

Shortly before the voting on Monday, Tinio turned to a panelist, Liga ng mga Barangay president Edmund Abesamis, and raised his voice at him.

Abesamis, a lawyer, had pushed for the postponement of the barangay elections again, with the disclaimer that his group has no self-serving motive. This did not sit well with Tinio.

This prompted other lawmakers to shout as well and call for order, but Tinio continued.

“Marami sa inyo mga 3rd-termer na, na matagal na dapat humarap sa publiko para pagbotohan (Many of you are 3rd-termers, who should have faced the public for election a long time ago),” he said, referring to barangay officials who have overstayed in office because of postponed elections.

“Ang sentimyento po ng mamamayan na hindi na natin tinanong dito ay matuloy ang eleksyon,” Tinio said. (The sentiments of the citizens, whom we did not consult anymore, is for the elections to push through.)

Garcia was seconded by another lawmaker, prompting the committee chair, CIBAC Party-List Representative Sherwin Tugna, to bang the gavel and say the motion is approved.

“Mr Chairman, it’s the 3rd time that we will be postponing barangay elections,” Erice said. “Ang eleksyon po ay simbolo ‘yan ng demokrasya.” (The elections are a symbol of democracy.)

Erice said this move belittles the people’s right to choose their leaders.

(The barangay officials are the ones the people encounter and approach for help every day. But we rushed this again. We’re holding the hearing only now, and yet we’re already approving it?)

Erice pointed out, too, that because of election postponements, barangay officials have been serving for 5 years now.

Erice said this “disturbs” democratic processes. “Hindi po ito maganda (This is not good),” he said.

Surigao del Norte Representative Robert Ace Barbers defended the proposal, however, saying that postponing the barangay elections “is not actually going against the principles of democracy.”

“Let’s not forget that postponing it is not totally deleting, cancelling, or removing elections in this country. We are just postponing this particular elections because there are more serious problems that we should address first before we continue this,” Barbers said.

The Comelec’s representative, Director Teopisto Elnas Jr of the poll body’s election and barangay affairs department, however, said Comelec is 100% ready to hold the barangay and SK polls on May 14.

The National Citizens’ Movement for Free Elections (Namfrel) earlier warned that postponing the barangay polls “brings about a sense of caution and instability” among village officials.

“The postponement of the barangay and SK elections for the 3rd time is against the standard of regular elections,” election watchdog Lente said in a statement Sunday, March 11.

Conducting regular elections, Lente reminded the country, “is one of the core foundations of democracy.” – Rappler.com