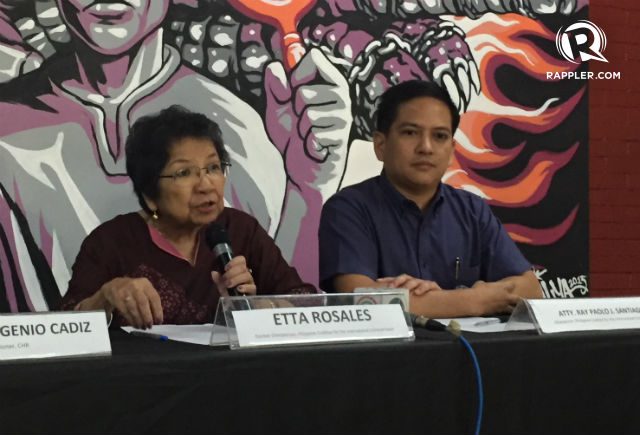 MANILA, Philippines – A coalition which advocated for the Philippines’ inclusion in the International Criminal Court (ICC) condemned President Rodrigo Duterte’s decision to withdraw “in the strongest terms possible,” calling it “anti-people.”

“What [the withdrawal] does is that it again exposes Filipinos to possible atrocious crimes without resort to justice and accountability,” Philippine Coalition for the ICC (PCICC) chairperson Ray Paolo Santiago said on Thursday, March 15.

“We challenge the President to think of the Filipino people in their quest for justice and accountability and not just for what he thinks for himself,” Santiago added. “Why is the President so scared of the ICC that he had a knee-jerk reaction?” (READ: Malacañang: Duterte not afraid of International Criminal Court)

Duterte on Wednesday, March 14, declared that the withdrawal would take effect immediately despite the Rome Statute explicitly saying that there should be a one-year period from the submission of a letter to the United Nations secretary-general. (READ: What the Rome Statute says about withdrawing from the Int’l Criminal Court)

Calling the signing of the statute fraudulent, Duterte said the Philippines was “made to believe that the principle of complementarity shall be observed, that the principle of due process and the presumption of innocence as mandated by our Constitution and the Rome Statute shall prevail, and that the legal requirement of publication to make the Rome Statute enforceable shall be maintained.”

Leaving the ICC, according to Santos, would give Filipinos no recourse if there is no justice to be attained in the Philippines.

“It goes against addressing impunity for the most atrocious crimes,” Santiago said. “The Filipino people’s hopes and dreams for holding human rights violators accountable should not be doused by a single man’s fear of accountability.” (READ: PH withdrawal from ICC may imply Duterte ‘afraid’ to be probed – Robredo)

Established in 2000, the PCICC is a member of a global network of at least 2,000 nongovernmental organizations (NGOs) advocating for a fair and effective ICC. The Philippine group strongly pushed for the ratification of the Rome Statute, the court’s founding document.

Former Commission on Human Rights (CHR) chairperson and former PCICC chairperson Etta Rosales recalled the struggle that came with lobbying for the statute’s ratification in the Philippines, adding that withdrawal would be such a setback to the country’s efforts.

Duterte, she said, may have been “ill-advised” when he made the decision, which comes after the ICC’s Office of the Prosecutor announced it is starting a preliminary examination “following a careful, independent, and impartial review of communications and reports documenting alleged crimes” committed in the Philippines since 2016. (READ: Roque: ICC should have dismissed complaint vs Duterte)

“What he did right now is something he has been wanting to do a long time ago,” she added.

Santiago, meanwhile, said Duterte’s move bypasses the process in place for accountability. If he did not do anything wrong in his drug war, he should not be afraid to be scrutinized. (WATCH: The International Criminal Court process)

“Withdrawing simply because he feels like he’s a target goes against the principle of due process,” he said. “Because when you have the accountability mechanism, you have to go through.” (READ: CHR: Withdrawal from Int’l Criminal Court can be seen as ‘encouraging impunity’) – Rappler.com