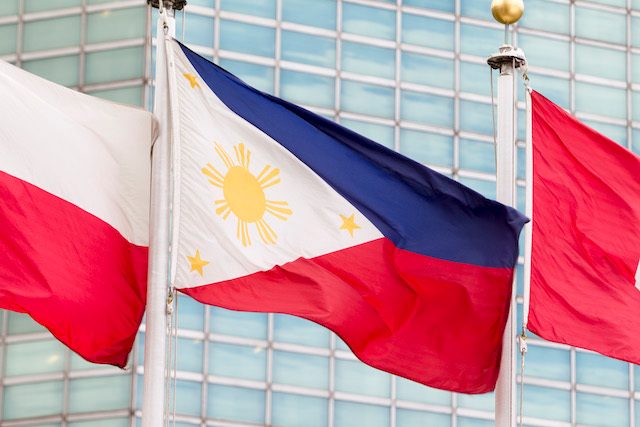 Facebook Twitter Copy URL
Copied
(UPDATED) 'The decision to withdraw is the Philippines’ principled stand against those who politicize and weaponize human rights,' reads the formal notice

MANILA, Philippines (UPDATED) – The Philippines, on Friday, March 16, formally transmitted its notice of withdrawal from the International Criminal Court (ICC) to the office of the United Nations (UN) Secretary-General in New York.

Ambassador Teodoro Locsin Jr, Permanent Representative of the Philippines to the UN, submitted the formal notice to the chef de cabinet of the UN Secretary-General, as Antonio Guterres was abroad at the time.

The one-page letter dated March 15 informs the UN Secretary-General “of the decision of the Government of the Republic of the Philippines to withdraw from the Rome Statute of the International Criminal Court in accordance with the relevant provisions of the Statute.”

It explains that the Philippines is withdrawing because of the supposedly politicized nature of human rights and insists the Philippines has a functioning justice system.

“The decision to withdraw is the Philippines’ principled stand against those who politicize and weaponize human rights, even as its independent and well-functioning organs and agencies continue to exercise jurisdiction over complaints, issues, problems and concerns arising from its efforts to protect its people,” reads the document.

The letter makes no mention of the withdrawal being “effective immediately” as Duterte insisted in his press statements announcing the country’s bid to withdraw from the ICC.

Under the ICC process, the withdrawal takes effect after a year. According to the Department of Foreign Affairs, the countdown to this starts on March 15, the date of the letter.

The letter also did not repeat some of Duterte’s arguments such as his supposed presidential immunity and the non-effectivity of the Rome Statute because it was supposedly not published in the Official Gazette.

However, it is not yet clear if the President’s press statements were also transmitted to the UN Secretary-General.

Duterte has insisted that the ICC has no jurisdiction over him. This comes after ICC Chief Prosecutor Fatou Bensouda announced the court has begun its preliminary examination into Duterte’s bloody drug war.

The examination is meant to determine if the ICC has jurisdiction over the case. If the court concludes this is so, they will begin an investigation.

In Manila, Presidential Spokesperson Harry Roque reiterated that the President will not change his decision to withdraw from the ICC.

On the ICC’s call for the Philippines not to leave the court, Roque said in an interview on GMA7’s morning show, “Too late po, parang naka-alis na po ang tren [sa istasyon] (It’s too late, the train has already left [the station]).” – Rappler.com