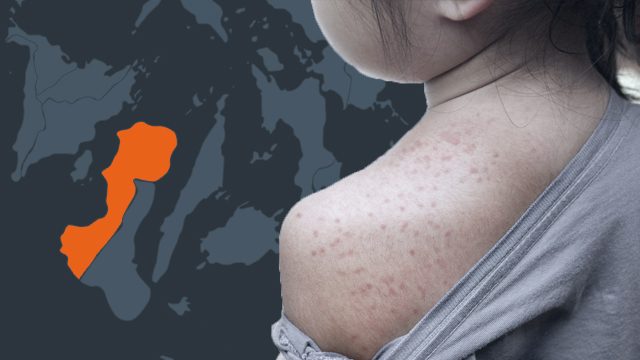 Facebook Twitter Copy URL
Copied
Kabankalan City is near the boundary of neighboring province Negros Oriental, where a measles outbreak has also been declared

BACOLOD CITY, Philippines – Kabankalan City in southern Negros Occidental has declared an outbreak after 3 cases of measles were confirmed.

Mayor Isidro Zayco said Monday, March 19, the declaration of a measles outbreak in his city was based on the guidelines set by the Department of Health.

He added that massive vaccination is currently being implemented.

He urged mothers to bring their children to health centers for immunization to stop the spread of the virus in the province.

Meanwhile, some 20 members of the local media were immunized for measles, mumps, and rubella at the Government Center in Bacolod City to encourage the parents to avail the anti-measles of the government. This is also to allay fear from the public brought by the Dengvaxia scare.

Media practitioners from print, radio, and television, as well as the staff from the City Mayor’s Office, received the vaccine Monday, March 19, administered by Dr Grace Tan, head of the City Health Office-Environment Sanitation Division.

Symptoms of measles, a highly contagious respiratory infection caused by a virus, include total body skin rash and flu-like symptoms, like fever, cough, and runny nose. (FAST FACTS: What is measles, and how can it be prevented?)

A measles outbreak has also been declared in a barangay in Taguig City, Zamboanga City, Davao Region, and Davao City past weeks. – Rappler.com