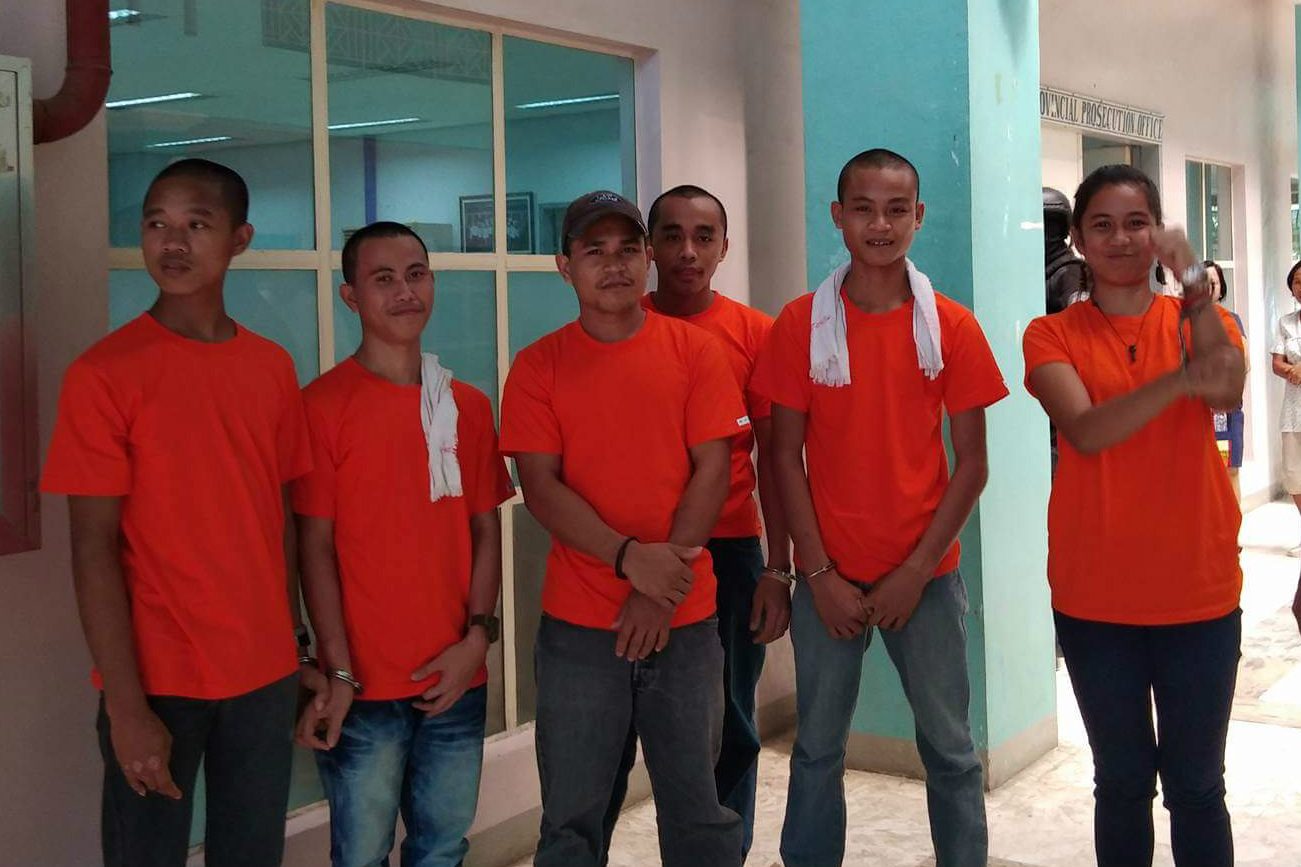 Facebook Twitter Copy URL
Copied
It's been a month since the military arrested Myles Albasin and 5 other young people in Negros Oriental. They allegedly fired at the soldiers, but have tested negative for gunpowder.

NEGROS ORIENTAL, Philippines – On Tuesday, April 3, it will be exactly one month since veteran journalist Grace Cantal Albasin and her husband received that jarring call. Their daughter Myles – youth leader, recently graduated from the University of the Philippines in Cebu, about to enter the Ateneo de Davao law school in June – had been arrested by the military with 5 others.

The couple would’ve have run to the detention center right that minute, except it’s here in Negros Oriental, more than 350 kilometers from their home in Cagayan de Oro via various routes.

The charge, according to the military, is that Myles and her companion were in possession of firearms and explosives. What Grace knows is, the group of young people were staying in the town of Mabinay to help organize a farmers forum.

Mabinay, the most populous municipality in Negros Oriental, is a 3-hour bus ride from Dumaguete City.

“I know that Myles is part of Anakbayan. She visits communities, joins transport strikes, does research. My daughter is an activist, and I don’t think there’s something wrong with that,” Grace told Rappler in late March.

Her daughter only did what is right – to help the marginalized, she said. (READ: Youth activism: More than just organized action)

The military’s version: According to the police report, the Philippine Army, led by First Lieutenant Prad Adoptante and Second Lieutenant Reymart Africa, conducted a patrol in the area of Luyang village, Mabinay.

It was in the wee hours – at around 2:30 am – of Saturday, March 3. The military claimed armed men shot at them with automatic rifles. They said the exchange lasted over 5 minutes, then they heard a male voice shouting they would surrender.

After the encounter, the army arrested the suspected members of the New People’s Army (NPA), the communist party’s guerrilla arm:

Myles and her companions invoked their right to a preliminary investigation.

The group has since been called the Mabinay 6 in the media.

Parents finally see Myles: Grace and her husband drove from Bukidnon, then caught the first flight on Sunday, March 4, from Cebu to Dumaguete City.

When they arrived at the Negros Oriental detention and rehabilitation center around 4 pm, they were not allowed to see Myles. The guards argued it was past visiting hours.

The crying mother insisted, and they were eventually allowed to see their daughter – but inside the warden’s office, accompanied by civil military officers and Special Weapons and Tactics (SWAT) personnel.

“I hugged her. Finally, I was able to see her, that she’s alive, and was able to talk to her, but without privacy,” Grace told Rappler.

On Monday, March 5, Grace visited the detention center again at 8 am with their lawyer. Parents of the 3 other detainees from Negros Occidental were there too. They were not allowed to see their children because it was not a visiting day.

Grace reached out to the local media. Negotiations went on for hours. By 11 am, they were allowed to see their children again, now with privacy.

On March 21, Myles turned 22 behind bars. Her family came to have lunch with her and her fellow detainees.

Negative for gunpowder: The story that Grace got from her daughter was contrary to the military’s account: it was the military that started firing at the young people on March 3.

“Myles told us that they were staying at an abandoned house on top of a hill in Mabinay. They were sleeping when they heard a rock being thrown at the house. Then the military knocked and arrested them,” Grace said.

Grace asked around the area if an exchange of fire happened, because, if there were, “they would have woken up to the sound.”

“Those who live near the house where Myles was staying said they heard 3 or 5 shots. But those living a kilometer away said they did not hear anything because they were asleep,” she said.

The 6 detainees all tested negative in a paraffin test.

They are charged with illegal possession of firearms and explosives in violation of the Republic Act 10591 and Republic Act 9516.

“My child is not an NPA. They (military) said there was an encounter. They already lied about that. What about other things? They could be lying about other charges,” Grace added.

“That could be their tactic, so one might turn against the other. I told Myles not to entertain them. You can’t really say if they suddenly do something to her,” she said.

Congressional probe: On Myles’ birthday, Kabataan Representative Sarah Elago filed a resolution directing the House committee on human rights to investigate the arrest of the Mabinay 6.

Several students and teachers have also staged protests in Cagayan de Oro and Cebu, condemning the arrest and calling on the government to free these young people.

“When they oppose or criticize policies, it doesn’t mean they are terrorists. That makes them targets of this crackdown,” she said.

Myles, a student leader when she was in UP Cebu, is a member of leftist group Anakbayan.

Duterte gov’t not fond of youth activists: The Duterte administration is not exactly friendly to youth activists. President Rodrigo Duterte threatened UP students that Lumad youth would take their slots if they keep “walking out” of their classes as a sign of protest, which he said was a “waste” of taxpayers’ money.

In November 2017, 22-year-old Jo Lapira, a UP Manila alumna, was among the 15 who died in a clash between government troops and suspected NPA members.

In November 2017, Duterte accused the National Democratic Front-Communist Party of the Philippines-New People’s Army as a “terrorist organization,” and officially ended peace talks with them.

In February 2017, the justice deparment filed a petition seeking to declare alleged CPP-NPA members as “terrorists” under the Human Security Act. – Rappler.com

*All quotes are translated in English