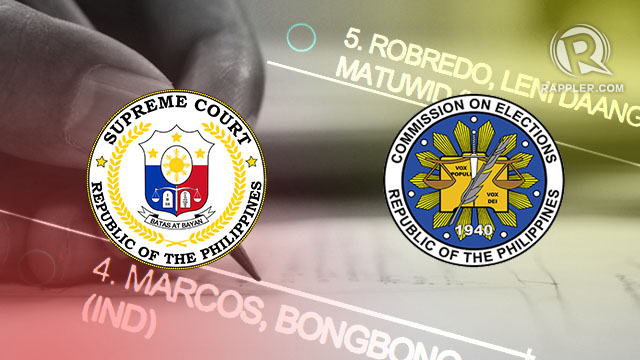 MANILA, Philippines – Contrary to the ruling of the Supreme Court (SC), the Commission on Elections (Comelec) had issued a resolution setting the ballot oval shading threshold at 25% for the 2016 elections.

Why it matters: The SC, acting as the Presidential Electoral Tribunal (PET), had denied Vice President Leni Robredo’s motion to consider ballot ovals shaded by a minimum of 25% as valid votes in the ongoing ballot recount for the electoral protest filed against her by ex-senator Ferdinand “Bongbong” Marcos Jr.

The PET said it is “not aware” of any resolution issued by the Comelec that states the applicability of the 25% minimum threshold for the 2016 polls. The High Court said it has “no basis,” therefore, to impose a 25% threshold for the ballot recount.

But documents obtained by Rappler showed that the Comelec en banc had recognized the 25% shading threshold in a resolution issued on September 6, 2016, 4 months after the May polls.

What the resolution states: Comelec Commissioner Luie Guia wrote a memorandum to lawyer Felipa Anama, clerk of the PET, informing the High Court that the vote-counting machines (VCM) were configured in May 2016 to count ovals with at least a 25% shade as valid votes.

“The system adopted is designed to scan every oval on the ballot and count as vote those that contain appropriate marks based on pre-determined shading threshold. Although the voters are told through the voter information efforts of the Commission to shade the ballots fully, the shading threshold was set at about 25% of the oval space,” wrote Guia.

He explained that the 25% threshold was set this way to ensure votes “are not wasted” because of inadequate shading and no accidental small marks would be counted as votes.

“In other words, when a mark covers at least 25% of the oval, said mark is supposed to be considered a vote by the system,” said Guia.

Guia added that VCM manufacturer Smartmatic provided the Comelec’s Random Manual Audit committee with a visual illustration of how ovals shaded 25% would look like.

A random manual audit is the process where the Comelec gets sample ballots to check if the VCMs counted votes accurately. What the VCMs counted in an automated way, auditors would then count in a manual way.

This is similar to the manual recount of votes in the vice presidential race. (READ: TIMELINE: Marcos-Robredo election case)

Guia’s letter to Anama was attached to an excerpt of the minutes of the Comelec en banc’s meeting on September 6, 2016.

At the end of this excerpt, the Comelec en banc said it would “adopt and confirm” Guia’s memorandum along with the Random Manual Audit guidelines “as the position of the Commission on the type of marks or shadings that would be read as votes or non-votes by the optical scan counting system for the May 9, 2016 NLE.”

Read a full copy of the Comelec resolution below: