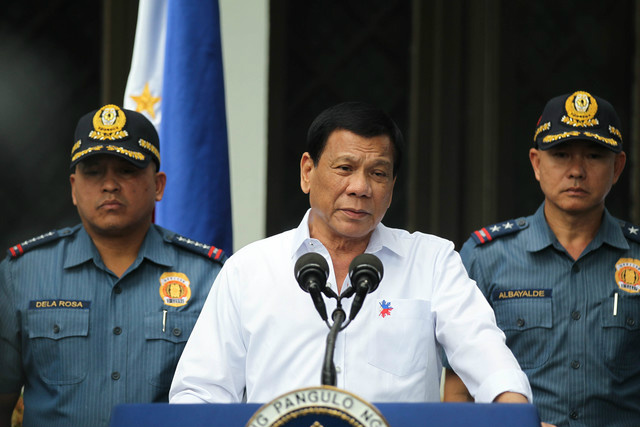 MANILA, Philippines – Despite an order from the Supreme Court and even after Malacañang said it would comply with the SC order, the Philippine National Police (PNP) said it would only share the administration’s drug campaign documents with the High Court after President Rodrigo Duterte himself gives the go-signal.

The incoming and outgoing PNP chiefs – Director Oscar Albayalde and Director General Ronald dela Rosa, respectively – made the statement in a GMA News to Go interview on Wednesday, April 18, when asked about the SC order for the government to provide the Court full documentation of the deaths that arose from legitimate police anti-drug operations.

This was seconded by his successor, Albayalde, who said, “We are preparing for all the documents just in case we have the go-signal from the Commander-in-Chief.”

Why is this important? The requested documents are part of the SC deliberations over petitions that seek to declare the PNP’s Oplan Tokhang – or  “the war on drugs,” as the government calls it – as unconstitutional.

Petitioners argue that the PNP’s Oplan Double Barrel – the umbrella term for all its anti-narcotics operations – has been open to police abuse, allegedly leading to thousands of brutal, unnecessary deaths. (READ: The Impunity Series)

The PNP earlier announced that it would seek the advice of Solicitor General Jose Calida, its counsel in the case before the SC. Dela Rosa has consistently cited the need to secure Duterte’s approval before sharing Tokhang documents with any group, including the Commission on Human Rights (CHR), and other bodies that may investigate the bloody campaign against illegal drugs.

Dela Rosa is not in favor of sharing documents with the High Court as this would supposedly risk the lives of police involved in the campaign. Albayalde, for his part, wants to share the documents in the name of transparency.

The CHR had been requesting for police operations files so it could perform its constitutional mandate of investigating possible rights violations in the campaign against drugs, but Duterte rejected the requests. (READ: Evading probes? The many times Duterte admin didn’t give drug war documents)

Up until today, when the government has counted over 4,000 drug suspects dead in its campaign, the CHR got little to no cooperation from the PNP. – Rappler.com