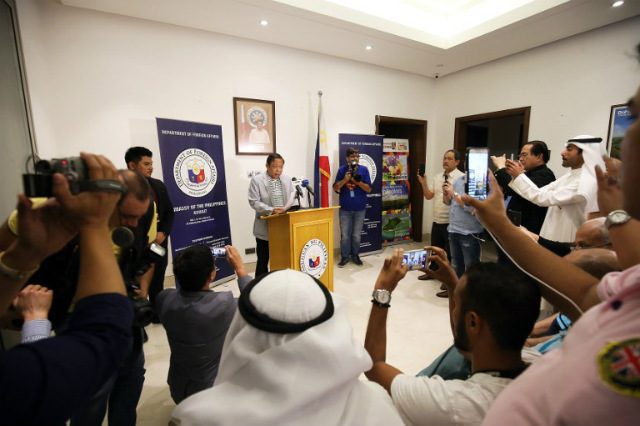 Citing Kuwait’s interior ministry, the Kuwait News Agency said that “inspectors have detained two Filipinos as they were enticing female housemaids of the same nationality to escape from their employers’ households.”

During interrogations, the two Filipinos admitted the crime “in addition to other similar offenses that had been committed in various regions of the country,” said Kuwait’s interior ministry.

The Kuwait News Agency said “the couple admitted that they had encouraged Filipinas serving in their employers’ houses to escape.”

“The authorities have launched investigations into such recurring cases following citizens’ protest that their domestic helpers have been lured by strangers,” added Kuwait’s state-run news outlet.

Kuwait’s foreign ministry handed Villa two protest notes. The ministry “expressed regret over such practices which could harm the friendship between the two countries,” said the Kuwait News Agency.

The Philippines earlier banned the deployment of OFWs to Kuwait upon the orders of Philippine President Rodrigo Duterte.

Duterte had slammed Kuwait over the abuse of OFWs, after 29-year-old OFW Joanna Demafelis was found dead in a freezer in Kuwait.

Kuwait, on the other hand, condemned Duterte’s statements. “This escalation will not serve the relationship between Kuwait and the Philippines,” said Kuwaiti Foreign Minister Sheikh Sabah Khaled Al-Sabah.

On Monday, April 23, more than 200 Filipinos who overstayed in Kuwait returned to the Philippines, after receiving amnesty from the Kuwaiti government. Philippine officials welcomed them home at the Ninoy Aquino International Airport. – Rappler.com