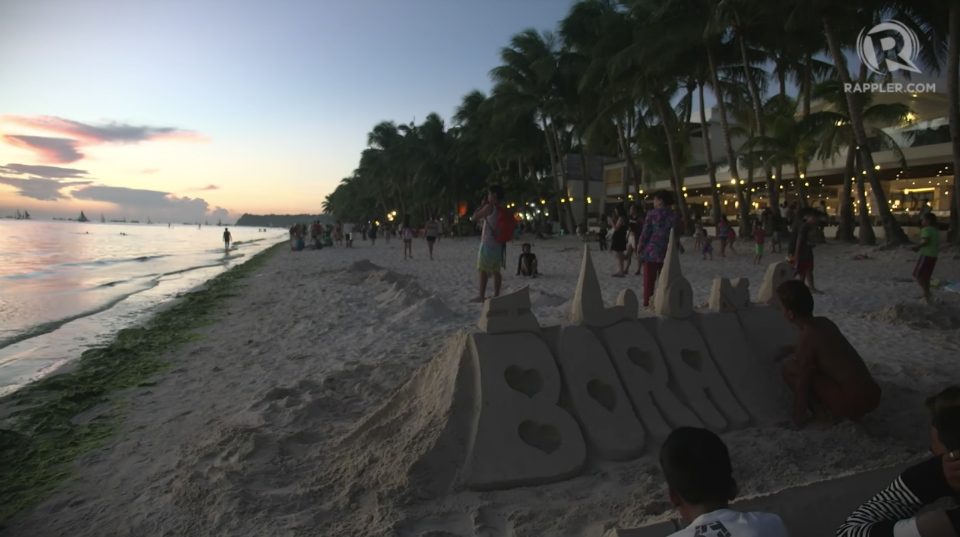 AKLAN, Philippines (UPDATED) – On the eve of the famous island resort’s closure to the public, the shores of Boracay teemed with tourists – a welcome sight for business owners scrambling to earn as much as they can on the last day of their operations.

Maria (not her real name), a small restaurant owner in Station 2, told Rappler she would temporarily return to her home province to wait out the closure of Boracay that was to take effect on Thursday, April 26.

Maria said going back home would give her a chance to earn a decent revenue during the shutdown.

Most of the items on their menu were no longer available. Maria said they’re serving whatever was left in their supplies, to make sure that they use up all their remaining stock before the shutdown. (WATCH: No clear gov’t plans 2 days ahead of Boracay closure)

Unlike the restaurant owner, Omaima Magarang did not have to worry about using up her stock before the shutdown. She runs a souvenir shop in Station 3. Her only hope is that her merchandise would remain in good condition after the closure.

“I hope the rehabilitation works would be completed earlier than scheduled. I fear that my souvenir items won’t be in good condition when we reopen again,” she said, adding that she was still thinking about how she would fund her children’s education during the shutdown period, when her revenue stream would be temporarily cut.

In March, President Rodrigo Duterte announced he wanted to shut down Boracay. The once a pristine destination hailed for its white sand beach has become a “cesspool,” he said, because of environmental problems.

With no official master plan on the Boracay rehabilitation project presented to the public, Duterte approved the recommendation of the environment, interior, and tourism departments to close Boracay to tourists for a maximum of 6 months.

Business owners, especially those running small shops and inns, have said that they were not considered in the decision. Some of these businesses have not even recovered from the fire that gutted their shops and supplies in September last year.

Businesses, residents, and workers are not opposed to the closure – they agree that the Boracay cleanup is long overdue. Their only concern is how they would get by during the shutdown.

Joey Urquiola, Department of Social Welfare and Development (DSWD) Aklan operations head, said that the government is there to support the needs of those who will be affected by the shutdown.

Urquiola told Rappler that the DSWD will give transportation allowances to aid those who will return to their home provinces, ranging from P1,000 to P5,000, depending on the application request.

However, some pointed out that the assistance provided is not enough to buy tickets for farther destinations, and especially for those with children. (READ: ‘Gov’t assistance during Boracay closure not enough’ – residents)

Urquiola also said that the department will also conduct livelihood training but the DSWD does not yet have a timeline regarding this.

The government has also said it will offer cash-for-work to displaced workers, which involves manual labor. What about those who cannot do this kind of work?

This is the question of Jobel Mendoza, 43, as well as many others on the island. Mendoza, who gives island-hopping tours, also noted that livelihood training from the government can provide new skills but may not necessarily be something that they can use during the island shutdown.

The government said it will hire the displaced workers, but not all the 17,000 affected by the closure. The Department of Labor and Employment earlier told Rappler that it will employ workers who can help with the rehabilitation.

Some locals pointed out that not everyone is amenable to doing manual labor, and the pay – around P325 per day – is not enough to sustain their families.

Around 600 policemen have been deployed for the shutdown. Military and police manned the entry and exit points of the island. (WATCH: Gov’t simulates terror attack, hostage-taking in Boracay)

The local government has also practiced the ID system in the ports, as only those with government IDs and certification to enter Boracay would be allowed entry starting April 26.

As government agencies prepare for the closure, Malacañang has yet to issue the official order effecting the shutdown.

Malacañang earlier downplayed the absence of a written Boracay closure order – an executive order on the shutdown of the island and a proclamation of a state of calamity.

A state of calamity, according to the Philippine Disaster Risk Reduction and Management Act of 2010, is “a condition involving mass casualty and/or major damages to property, disruption of means of livelihoods, roads and normal way of life of people in the affected areas as a result of the occurrence of natural or human-induced hazard.”

Declaring Boracay under a state of calamity would allow the government to disburse around P2 billion from the calamity fund, which government agencies said would augment their operational funds during the closure.

Revenue losses during a 6-month shutdown is estimated to run up to P1.96 billion, with the Western Visayas economy bearing the brunt of the economic losses, according to Socioeconomic Planning Secretary Ernesto Pernia. – Rappler.com