Apr 25, 2018 2:37 PM PHT
Sofia Tomacruz
Facebook Twitter Copy URL
Copied
If the Supreme Court ousts Chief Justice Maria Lourdes Sereno via quo warranto when the Senate is already convened as an impeachment court, the latter can determine whether or not to proceed with the trial, says Senate President Aquilino Pimentel III 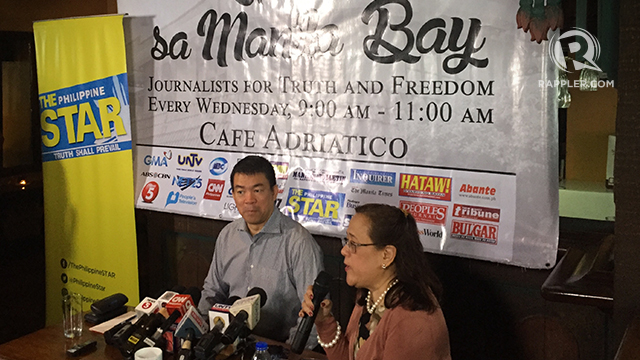 MANILA, Philippines – Should the Supreme Court oust Chief Justice Maria Lourdes Sereno via quo warranto when the Senate is already convened as an impeachment court, the latter can decide on the validity of her removal, Senate President Aquilino Pimentel III said on Wednesday, April 25.

Pimentel made the statement in response to questions on the possible scenario at the Kapihan sa Manila Bay on Wednesday.

Pimentel, a bar topnotcher, was asked if the Senate – supposing it was already in receipt of the articles of impeachment against Sereno and convened as an impeachment court – would still proceed with the impeachment trial if the SC rules to dismiss the Chief Justice.

Responding to that scenario, he said: “Now that we are already involved in the proceeding – kasi naging court na kami sa scenario mo –ang tanong ngayon diyan (because we’re already convened as a court in your scenario, the question there is), if the Senate will recognize the removal of the Chief Justice through a quo warranto. If the majority says that, ‘Okay, it’s a valid removal,’ there’s no more need to remove kasi impeachment is removal.”

“But if the majority says, ‘It’s invalid,’ if from our point of view there is stil someone to remove, so tuloy namin ang (we will proceed with the) impeachment,” he added.

Pimentel said that there will be “vote” to determine the position of the Senate impeachment court.

The senator said that if a majority of lawmakers sitting as impeachment judges decide that the removal of Sereno via quo warranto is not valid, then it follows that “the person impeached is still in position, therefore we continue with impeachment to remove or not to remove.”

He added that if the SC ruling “happens before we convene as an impeachment court, we will have no say in what happens,” he said.

Pimentel stressed that the impeachment court can only be convened once the House transmits the articles of impeachment against Sereno to the Senate.

“The Senate has to wait for the House for transmit the articles of impeachment. We have no business sitting as a court, as impeachment judges. if there is no one to impeach,” Pimentel said.

Asked if taking such a position may lead to a constitutional crisis, Pimentel said that concern would be part of the deliberations of the Senate court under such a scenario.

“That can be brought up in the discussion. If we take the contrary position that she has not been validly removed [and] it might result in a constitutional crisis, hence we might just as well accept what is in front of us. Puwede rin ‘yon (That can also be the case). But kung contrary ‘yung opinion, tutuloy po kami (But if the opinion is to contrary, we will proceed) because we are an impeachment court,” he said.

Speaker Pantaleon Alvarez had said that he wants lawmakers to approve the articles of impeachment against the Chief Justice one to two weeks after Congress resumes session in mid-May.

The House justice committee had approved the articles of impeachment against Sereno on March 8 after holding months of hearings. (LOOK: Why the House panel wants to impeach Sereno)

The document is set to be brought before the plenary, where legislators will vote to either approve or reject it. If at least one-third of House members approve the committee’s recommendation to impeach Sereno, she will be deemed impeached.

The High Court had said that it would decide on the quo warranto petition by the end of May.

Pimentel said that the Senate would observe how the House would take the SC decision in favor of the quo warranto, as well as public opinion on the ruling.

“If the SC decides a quo warranto case against the Chief Justice, then let us see whether the House will accept the decision of the SC and of course the people, titingnan din natin ang reaction ng taongbayan doon (we will look at the reaction of the people),” he said.   – Rappler.com